You are here: Home / breast cancer / Musings About the Mastectomy 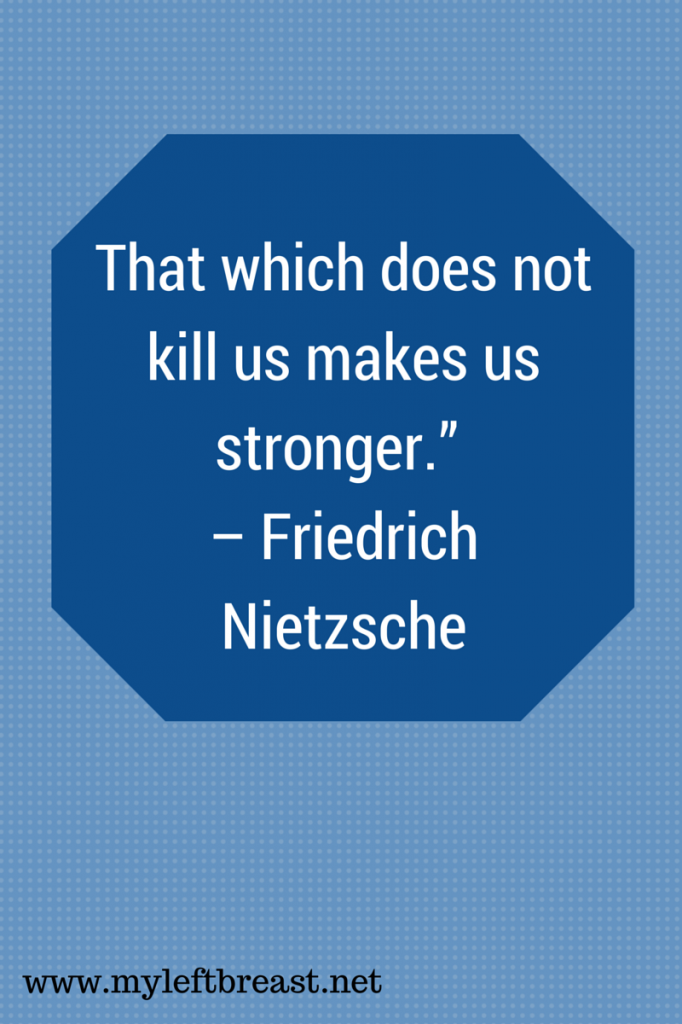 Since it’s a long weekend, and because I really can’t do very much around the house because of the whole surgery and all, I’m finding myself with a lot of time on my hands and I figure why not write? So, here goes.

Surgery was at 7:30 a.m. so we had to get up at 4:00 a.m. to get there by 6. That worked out just fine, ’cause I was so bleary eyed that I couldn’t really get too nervous, plus I’m generally ravenously hungry every minute of the day and since you can’t eat from midnight til after surgery, the less time I had to deal with not eating, the better.

The hospital was like a well oiled machine, from the minute I walked in things were quickly and efficiently being handled. They got me into my pre-op room, into my gown, got my IV in, my 2 OR nurses came in and introduced themselves (a nice touch, I thought!) my surgeons came in (there were 2, my breast cancer surgeon who handled the mastectomy and my plastic surgeon who handled the reconstruction), filled out some more paperwork, the anesthesiologist came in to check a few things (loved him) and before I could get too nervous, they were wheeling me into the OR.

Quick aside: I really need to acknowledge how much I admire my BC surgeon. Her name is Dr. Susan McManus and she was the one my OBGYN referred me to back on February 1st when the radiologist first mentioned the cancer word. He said that she was one of the best BC surgeons in NJ and I consider myself lucky that she took me on as a patient. She’s very strong and direct, but somehow on top of that, manages to be extremely compassionate.

It seems to me that she has nerves of steel, and I feel supremely comfortable with whatever decisions she would make on my behalf, which was a good feeling to have going into this major of a surgery. And right before the surgery she actually came over and hugged me! It was so sweet, and so out of character. Last surgery (my lumpectomy in February), she was all business, so this was completely unexpected and I felt sort of honored……I was so touched. She probably did it ’cause she felt so badly for me, but whatever, it made my day.

The anesthesiologist was with me as we went to the OR and I talked to him a bit, asked if he would be there the whole time, to which he replied yes, which was of course very reassuring. The last thing I remember after getting onto the table was when the nurses noticed that I still had my underwear on and said that I should take them off (for some reason I hate taking my underpants off during surgery, always try to sneak them through).

So here I am, wrangling my underpants off in the OR for all to see and the last thing I actually remember is the OR nurse showing them to me in a little plastic baggie, telling me that they’d store them there and give them to my husband…..AS IF I WAS WORRIED ABOUT MY UNDERPANTS GETTING LOST! As if I had nothing more pressing to worry about!

Next thing I recall was opening my eyes in the post OR room and seeing a very nice nurse who kept asking, “Do you have any pain?” to which I of course, said, “YES!” and she seemed very alarmed and surprised. I told her it felt like I had a huge rock pressed on my chest, and said something to the effect that I felt like what I would imagine it would feel like to have just had open heart surgery. I have a feeling she interpreted that to mean that I thought I was having a heart attack, ’cause they apparently kept me there for 2 hours trying to regulate the pain.

Surgery was over at 11:00 and they didn’t bring me out of there ’til about 1:00 by which time my husband and sister-in-law were a nervous wreck, ’cause it took so long. Here they are wheeling me down the aisle towards them, and my sister-in-law is crying and I’m waving and smiling as if I’m as happy as can be. Of course, I still had drugs coursing through my system and a pain pump, so was feeling just dandy.

Then we hung out in the room for a while. The thing I was most worried about was that I would have a bad reaction to the anesthesia which would make me throw up (yes, I’m a weirdo about stomach stuff, clearly) and so after about an hour when I was still feeling ok, I asked the room nurse if I was out of the woods, stomach wise and she said that I probably was.

So….I sent my husband off to go get me something to eat! Yes, I’m not ashamed to announce that 2 1/2 hours after this horrible, creepy surgery I was hungry and wanted to chow down. I was smart enough to ask for something innocuous like yogurt but, yes, I was starving. I also had incredible dry mouth and was drinking tons of water but felt pretty good, considering what had just happened.

TIP: Be very aware of your pain relief options. Don’t be brave and try to tough it out. If an automatic pain pump is an option, ask them to order it for you.

The pain pump I had delivers one of the “cains” (ie. novocain, lidocaine) to the exact surgery incision site, and is NOT systemic, so drugs aren’t pumping through your system and you’re able to move around more easily, with little or no pain. I didn’t have to do anything, this thing worked on its own, nothing manual at all, it just distributed the exact amount of drug for the first 5 days.

On top of that, the doctor prescribed Vicodin every 6 hours. By about 6:00 that night, I was asking them to increase it to every 4 hours as I was still feeling discomfort and they did. You have to be vigilant about your own pain. From my perspective, the less pain I’m feeling, the better and quicker I’ll heal. The entire time I was there, I had to remind them every 4 hours that it was time for another dose. It’s not that they’re ignoring you, it’s just not as top of mind for them as it is for you, so keep on top of your pain meds and let them know when it’s time for the next one.

For some reason, the nurses are very keen on you getting up to pee. Once you do that, they seem to be supremely happy and feel that you’re well on the road to recovery. Since I can pretty much pee on demand, 24/7, I knew that wouldn’t be a problem and promptly got up to pee after about 2 hours, what with all the IV drip and water I was drinking. HOWEVER, it was really scary getting up and having to walk. My chest hurt, my back hurt, I was scared to move and was generally worried about whether or not I could stand and walk to the bathroom. But I did and it was fine. The nurses measured how much I peed, and were thrilled beyond belief and recorded it on some chart (so weird).

I was really surprised at the amount of range of motion in my arms. I could move my arms up and back and around, it was literally just my chest area that was uncomfortable. Go figure. All along I had worried that my arms would be stuck to my sides, and here I was moving them up and over and all about.

Mike stayed overnight to help in case I needed anything and believe me, I kept him busy. On my pre-op day, I had asked them to get him a bed/cot to sleep on and so they arranged a recliner chair which literally went flat and was a sleeper cot kind of arrangement.

In fact, he slept so well, that the next morning when my plastic surgeon came in to see me, he was smiling (I would say smirking, actually) as he glanced over at my husband on his recliner, snoring away, with his pillows all smooshed around his head. I couldn’t figure out why he was laughing, until I happened to glance at the clock on the wall and noticed that it was 9:00 in the morning. Yup, that’s my husband – the world’s best sleeper. He can sleep through pretty much anything.

Now off to enjoy some of yesterday’s turkey, that my sister-in-law so nicely sent home for me.