You are here: Home / breast cancer / I Got Breast Cancer And Then Decided To Put In A Pool 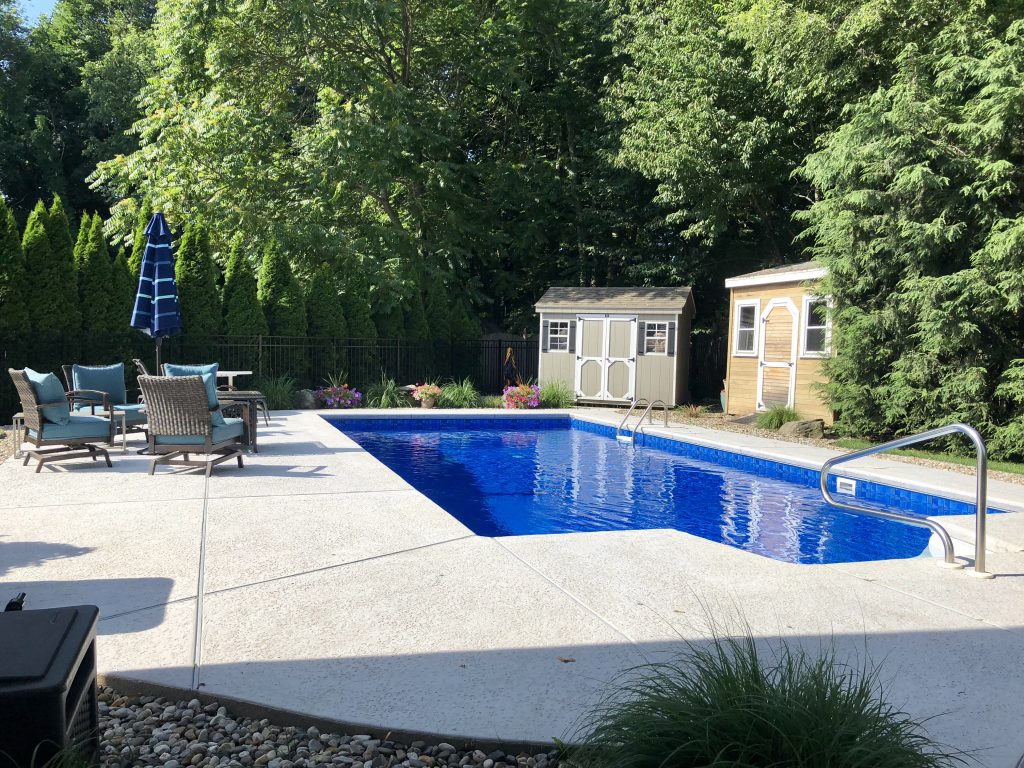 The pool saga is almost resolved. For those of you who followed me on Caring Bridge before I started My Left Breast, you’ll recall the whole pool dilemma. After my first chemo treatment, I came home one day and decided we were going to put in a pool.

And no, I had not yet seen “The Big C,” the HBO series with Laura Linney (turns out the main character did the exact same thing when she found out she had cancer, but I swear I decided before I watched the series).

Anyway, I decided that life was short and I wanted a pool and cost be damned.  After all why am I always working like a banshee if not to acquire things like a pool that will bring the family together, encourage the kids friends to come over, have lots of parties, bond as a family, create a community, etc. ?! I came up with lots of good reasons to put in a pool.

Now if you know me, you will realize that this is not the kind of thing I do. I grew up with parents who weathered the Great Depression and I am always worried about money.  I never think we should spend it, I obsessively save for the kids’ college funds and our retirement, and in general, I am a nervous maniac about money. So a big investment like a pool which has no real purpose other than to have fun is not something I do.

But…CANCER…you know?! Let’s have a little fun, let’s seize the day, let’s make each moment count….and all that jazz.

Or shall I say it’s now November, and we are still putting in a pool? We hit a few snags.

Understatement of the year.

The pool company forgot to get one of the permits, which wouldn’t normally be such a big deal, but the one they forgot to get is the one that you have to get right before they POUR THE CONCRETE! So once it was poured, and the very nice, but very concerned town pool inspector (seriously, he’s a doll) called and told me we had failed the inspection, we were all up the veritable creek without a paddle.

My husband was not happy (neither was I, but I was so weak from chemo at this point that I had no energy for anger, so was just sad and frustrated). There were long discussions about suing the pool company, about canceling the whole thing and starting all over from scratch with another pool company, of taking them to small claims court, of firing off missives from lawyers, lots of pacing around the pool obsessing about what to do, yadda, yadda, yadda.

And all I wanted to do was get the damn hole in the ground fixed so that we could swim in it sometime in the near future, for crying out loud. My two kids had gone from saying that the pool was off the hizzy, to asking questions like “Do you think we’ll be able to swim in it next year?” with those looks that only 12 and 14-year-olds can make that signal, “We knew this whole pool business was too good to be true.”

Well, yesterday the pool guys came over and had lots of serious discussions with my husband about how to fix this dilemma without digging up the whole freakin’ thing and it seems that we have come to a very palatable solution. They’re going to dig up the old concrete, show the inspector all the wiring they’ve already placed underneath it to ensure that the pool is appropriately grounded, and pour it all back in place. At no additional cost to us since it wasn’t our fault.

Which brings us to today’s tip: There is a solution to every problem, just hang in there and eventually you will all find a resolution.

When I found out that breast reconstruction with my original plastic surgeon (who was out of my insurance network so was only 75% covered) was going to be the cost of a rather nice little car, I cried for about an hour, screamed and raged a bit, then went home and called the insurance company, my breast surgeon, the hospital breast-care coordinator and eventually found a wonderful plastic surgeon who happens to be in network who does fabulous work, and so it all worked out.

He’s the plastic surgeon who’s going to be doing the work next Monday. And by the way, the pictures of his breast reconstructive work looks better to me than the pictures from the original plastic surgeon guy who was out of network and was supposed to be the best breast guy in New Jersey.

Ok, so it’s a stretch, but there are parallels to be made in everything in life if you just keep an open mind.

So those are my words of wisdom for this beautiful, unseasonably warm, spring-like November day. Here’s to swimming in the new pool NEXT summer!