You are here: Home / breast cancer / More About Dense Breasts 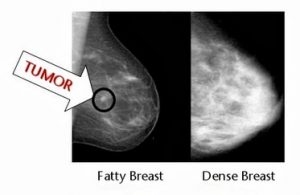 One of the things that has brought people to my blog are those posts that I’ve done on dense breasts, so this posting will go into more detail about this specific characteristic. Because my own breasts were very dense, I’ve had a more convoluted process with my own breast cancer diagnosis and hope that I can share information with others that can help them navigate the process and perhaps avoid additional surgeries.

Finding the tumor early is always the tricky thing with BC. Obviously, the earlier you find it, the better. The first tumor I found was very easy to distinguish – it was in the top quadrant of my left breast and I found it myself when I brushed against it one night. It was clearly defined, and I knew right away that it wasn’t normal – it was about an inch long and a half inch wide.

My breast cancer surgeon easily did a needle biopsy on the lump (as easy as it can be to have a needle stuck in your boob, but compared to some of the other procedures, it was a walk in the park) and the pathology report quickly confirmed her diagnosis of breast cancer about 3 days later. She thought, based on its size and the fact that she didn’t believe there was lymph node involvement, that it was Stage 2.

A lumpectomy was recommended, due to the Stage and initial biopsy report. The surgery was scheduled for a week later, and it was pretty straightforward with no particular complications other than the general discomfort of any surgery. My BC surgeon told us that she had removed the entire mass, with clean margins all around, and that the tumor was under 2 cm. Clean margins are good, a small size tumor is good and confirmation of no lymph node involvement is even better as it means that it’s very unlikely that the cancer has traveled to other organs.

My pathology report indicated that the tumor was actually Stage 1 (not Stage 2) invasive lobular carcinoma, no lymph node involvement and a pretty good prognosis for the future. This was great news and my husband and I were doing the happy dance when we left her office the week after surgery, when we reviewed the final pathology results with her.

THEN…..about 3 weeks after my lumpectomy, the team of my breast surgeon, radiologist and oncologist met to do a post-op review of my case. The radiologist questioned my breast surgeon on the fact that she had only removed one lump, when the mammogram films clearly showed 2 smallish tumors right next to each other which appeared to be connected by a thin tissue.

My BC surgeon called my cell (doctors always seem to call you on your cellphone when you’re driving, with the most important information that you really would like to write down but can’t ‘cause you’re driving) to tell me that because of my dense breasts which makes my mammography films tough to read, she wanted to have a breast MRI done just to be 100% sure that she had removed everything. I wasn’t really too worried, other than being scared of the MRI because I was sure everything had been removed. 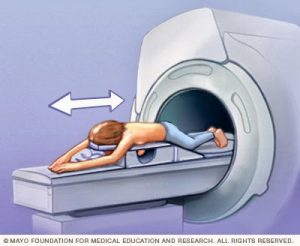 I share my thoughts about how to get through an MRI in another posting (this one’s getting really long!).

BUT…the veritable shit hit the fan afterwards because….the breast MRI showed that the 1st tumor was indeed completely removed. HOWEVER, there was a second tiny little tumor down in the lower left quadrant of my breast that no one had ever found. Not during the physical exams I had by the 5 different doctors and radiologists, not during the very comprehensive mammogram or the very comprehensive ultrasound I had done for the first tumor, and not during any of the self exams I had been doing obsessively since finding the first.

And it’s all because of my dense breasts.

An MRI is very sensitive and apparently it often shows false positives for a lump, so after the MRI, I had to do another ultrasound and biopsy to confirm that the suspicious lump they found in the MRI was indeed cancerous. The ultrasound confirmed that it was a lump and that it did look questionable. The radiologists recommended a Core Needle Biopsy (more on that for another posting) where they removed cells from the tumor which then confirmed that it was another cancerous tumor.

And that meant, because it was in a whole other section of my breast, that I had to have a mastectomy after the “successful” lumpectomy, because when there are 2 lumps in one breast, they don’t want you to keep that breast. I’m not really complaining. I’m just trying to give others insights into how to be sure that they don’t have to have more than one surgery. I wound up having to have 3 surgeries all together (my original lumpectomy, bilateral mastectomy and final reconstruction), and why have 3 if/when you can reduce that number by being aware.

I think in retrospect, I would have demanded an MRI as soon as they found the first lump if I knew that it was an option, and especially now that I know what I know about dense breasts. That might have meant I would have just gone directly to a mastectomy versus having the lumpectomy and then having a mastectomy afterwards.

Dense breasts are almost impossible to read in a mammogram. You can’t really see through the dense areas of your breast so tumors can be hidden and can be missed very easily. An MRI picks up everything. MRI’s costs a lot more than Mammograms (@$3,000) which is why they’re not as readily accessible as mammograms.

So, if your doctor tells you that you have dense breasts and there are questionable results on a mammography, ask him/her if he/she thinks it warrants an MRI. And push for it, if your gut tells you to.