You are here: Home / My Hot Flash Solution: Remifemin 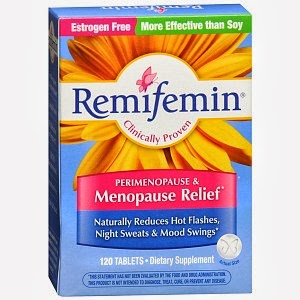 “I don’t have hot flashes.  I have short private vacations in the Tropics.”
— Anonymous

I found something that relieves the hot flashes and night sweats I get from taking Tamoxifen.  Actually, they started with chemo and then just got worse once I began to take Tamoxifen.

I’m almost afraid to put this in writing, but after about 12 days I really started to notice a difference.  It’s a natural supplement that contains Black Cohosh, called Remifemin.

Because my breast cancer was estrogen positive, my oncologist told me that I can’t take any type of soy, because there is a concern that soy acts too much like real estrogen in your body.   There aren’t a whole lot of other non-hormonal options, and these hot flashes are wicked!

There have been days when I’m walking down the frozen food aisle at the local Shop Rite and have literally put my head inside the freezer door because I’ve had a hot flash and feel like I’m going to burst into flames.  I don’t even look around to see if there’s anyone there; I’m so blatant about it, I just stick my head right in there and try to cool off.  I must look like such a wacko.

Now, I’m nothing if not persistent, so I’ve been reading and researching about natural, non-hormonal supplements that I can take that will help with this.  There’s a great little health food store in town and the woman there is extremely knowledgeable about supplements.  She recommended Remifemin.

I started it, thinking it was probably a long shot – chemo induced hot flashes are really extreme, and so are those brought on by Tamoxifen.  The reason that hot flashes are so difficult when you start chemo is because chemo literally throws your body into menopause in a matter of weeks, vs. the normal process where your body gradually transitions into menopause over several years.

Twelve days after I started taking it I began to notice a change.  Now, several months later, the main difference  is that while I still have hot flashes & night sweats, they are far less extreme, and more manageable since I’ve started taking the Remifemin.   You do need to be very consistent and take it twice a day, once in the morning and once at night in order to get the full effect.

Just wanted to share the good news for anyone else going through this who doesn’t want to (or can’t) take anything hormonal, or can’t take soy based products.  Remifemin is available over the counter and you can get it at health food stores or online (see link above) and is taken twice a day (20 mg).  It costs about $32.00 for a box that lasts for 2 months. I also explored just using plain old Black Cohosh supplements, which are much cheaper, but they didn’t do the trick.

Also, the woman at the health food store told me that I should be careful when buying natural supplements, as many of them use a soy based solution.  Remifemin doesn’t and she said that it also contains a very refined black cohosh which is more readily absorbed and more effective.  The company has also conducted over 15 clinical studies (most supplement and vitamin manufacturers don’t) to quantify it’s results.

All I can say is that it’s working for me.  Let me know if any of you try it and we can compare notes on its effectiveness.