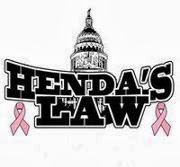 “My mission is simple.  To pass legislation in Texas to increase education and awareness about dense breast tissue and to help at risk women and those with dense breast tissue get better screening options to detect breast cancer at an early stage.”
— Henda Salmeron

I have a Google daily word search set up for “breast cancer” and review a page full of articles each day, looking for news in breast cancer research. Today I was surprised to see this article: “Texas Governor signs breast density law,” which immediately drew my attention.

Texas Governor Rick Perry signed a bill into law last week that requires breast density risks to be specifically spelled out in mammography results that are mailed out to women after their mammogram. The bill (Texas Act HB 2101) has been named “Henda’s law” for a woman named Henda Salmeron (she has her own blog, click on her name to visit, she’s pretty amazing), who was diagnosed with Stage 2 breast cancer after a mammogram didn’t pick up her tumor because of the density of her breasts. Upon researching this, it turns out that two other states have similar laws – California and Connecticut. Why every state doesn’t have this law is beyond me, as it seems like it should be mandatory to tell women something this important about their breast health.

I’ve received mammogram reports for years, and none of mine ever mentioned that I had dense breasts. And in fact, I never knew until I was diagnosed with breast cancer that I had them. If I had known, I could possibly have prevented one of my three surgeries, the lumpectomy. If I’d known that I had dense breasts, I would have just pressed my doctors to go directly to an MRI, after I found my 1st lump, to be sure that there was just the one. Click here if you want to read my post with the details of what happened after my lumpectomy.  The image below will help you see the difference between a dense breast and a normal “fatty” breast.  As you’ll see the dense breast is very hard to see through via mammogram, so if there is a cancerous growth it could go undetected. 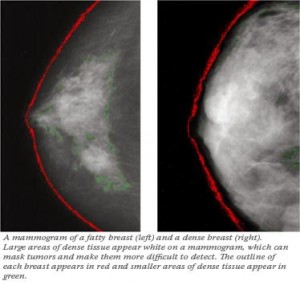 I can’t believe that I am continuing to find more information about this. I have been researching this for the past year, and continue to be amazed at how much information is out there, yet so many women (even someone like me who has spent an inordinate amount of time researching it for the past year) still don’t know some of the very basic information. I just found out about a 501c3 non-profit organization called Are You Dense, which focuses on educating women about dense breast tissue and its role in the early detection of breast cancer. According to Are You Dense, the association between the likelihood of breast cancer and tissue density is well established in the medical community. Here are some really startling statistics about dense breasts and its link to breast cancer incidence:

Click here for a fact sheet about dense breasts from Are You Dense. However, after you review this, I will remind you that while this organization promotes getting additional ultrasounds when you have a “suspicious” mammogram, in my instance the ultrasound didn’t find my second small lump, either. It wasn’t until I had an MRI that they found it, as it was very tiny and didn’t show up in the ultrasound OR the mammogram.

Please don’t think I’m telling you not to get your annual mammograms.  I am actually encouraging you to be your own advocate:  Get your annual mammogram and ask the radiologist if you have dense breasts.  If you do, be aware of your options and be proactive.  During this entire experience, I’ve never had a physician deny me of a procedure when I requested it (which surprised me).  I wasn’t always TOLD of my options, but once I found out my options (often on my own) and asked for a specific procedure, my surgeons, oncologists and radiologists always agreed to them.