You are here: Home / Uncategorized / The Visiting Ducks and The Pool (Yes, I Promise That This Relates to Breast Cancer) 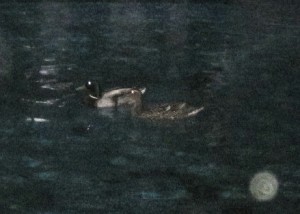 And the funny thing is that none of this pool nonsense is bothering me, this year. I find the whole thing to be kind of hilarious and par for the course; it doesn’t seem like the end of the world, the way it would have in the past. I mean, after all, it’s not breast cancer, ya’know!? So really, who cares as long as it gets fixed in time for the summer, right? Plus, why in the world would I complain – it is after all – a built in pool! I realize of course, that we’re very fortunate to be able to put in a pool, so the idea of complaining seems ridiculously arrogant.
So that’s the state of the pool. And I suppose that because it’s so rocky and messy out there, and kind of looks like a moldy, rocky pond, these 2 local ducks seem to think it’s a natural home for themselves and keep visiting.