You are here: Home / My Son’s Latest Craze: Planking 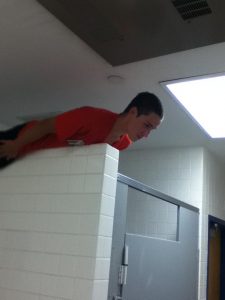 “Making the decision to have a child is momentous.  It is to decide forever to have your heart go walking around outside your body.”
— Elizabeth Stone
Have you heard of the youtube phenomenon called planking?  It’s my 13 year old son’s latest obsession.  Apparently they run around the school and do group plankings, like the one above (oh yeah, that’s in the school bathroom). Then the lead says “migrate” and they all go somewhere else to plank.

Well, I suppose it’s better than doing drugs or drinking.  Except……..I just searched it on youtube and of course, the very first reference that pops up is “Planking exercise kills Australian man.” Hmm……maybe I’d better take that back.

Having kids this age is kind of scary, but also hugely entertaining.  The lingo is so different than what we used when we were teens (we, being anyone over 40).  When somebody does something that we would say is uncool, my kids say “That was so awkward.”  Pretty much anything that Mike or I do these days is deemed  awkward by my kids.  And then there’s “random.”  They use that a lot, too.  For example, if I change the topic mid-stream in a conversation,  my daughter will rather haughtily look at me and mutter “That was so random,” which I suppose it was, but come on, cut me some slack kid.

Today I let her drive my car.  She hasn’t quite gotten her permit yet, but is in Driver’s Ed and will turn 16 in a few months and I’ve been wanting to let her try driving for a while, so on a whim this afternoon, I took her to a parking lot and let her drive around for about 10 minutes.  I have a feeling it was probably illegal, but I’ve been wanting to test her out and see how responsible she can be and she actually did ok.  She was pretty giddy with excitement and said “I’m not gonna’ kid you, I feel pretty boss,” which was her interesting way of saying it was fun.

Later on, we went to get her a graphing calculator (whatever the heck that’s for, did we have these things in high school?!) and on the way home, I had to take a detour because one of the bridges was still down after all the flooding and we wound up going on a circuitous route along the banks of a beautiful river.  It was so peaceful and beautiful, one of those little mini-moments that you don’t expect but that turn out to be a lovely surprise.  It was so nice to share it with her.   They’re growing up so fast, I want to hold on to the moments I can.  I’m so grateful that I can.

Previous Post: « My 10 Coping Tools to Get Through My Breast Cancer Diagnosis
Next Post: The New York City High Line »