You are here: Home / Uncategorized / Letting Go of The Wig
Today I donated my wig from last years chemo days to a local group that refurbishes wigs for cancer patients going through chemo.

The wig has been meandering around my bedroom for a while.  When I first stopped wearing it back in the spring as my hair started to come back in I kept it in its box on top of my dresser for a while, feeling somehow reticent to put it away quite yet.

Then I packed it up and stored it in a nice shiny bag in the back of my closet, along with a bunch of hats I used to wear last year when I was bald.  I would see the wig box every now and then and wonder what to do with it.

I even took it out once in the summer, and put it on just to see how it felt now that I have hair, but was so freaked out by the memories of chemo that flooded back as I looked in the mirror that I quickly pulled it off and stored it back in its box.

I had kind of a love-hate relationship with my wig.  In some ways I was so happy to be able to go out incognito when I wore it, because when it was on not everyone would immediately know I had breast cancer.  But on the other hand, the damn thing itched and was so hot during all my hot flashes from the chemo that I really couldn’t stand it by the end.

And then it took so long for my hair to grow back in and I was so anxious to just get on with my life that I started to see the wig as a symbol of my BC and started to really loathe the sight of it.

I didn’t know what to do with the darn thing.  I’m not the kind of person who likes to throw perfectly good things away; I’m a believer in recycling and re-purposing things that are perfectly useful for someone out there.  So, I held onto it.

And then last week, my friend Andra (a fellow BC survivor who helped me through so much last year) sent me an email about a local group she was working with and on the spur of the moment I sent them a message asking if they could use my wig.  They said yes, they’d love to take it.

Today I dropped it off and it was pretty uneventful.  The woman thanked me, took it, said it was in good shape and that was that.  I had somehow expected something more momentous after all the angst I had been feeling, but I really just felt good that it was out of my house and would be useful to someone else. 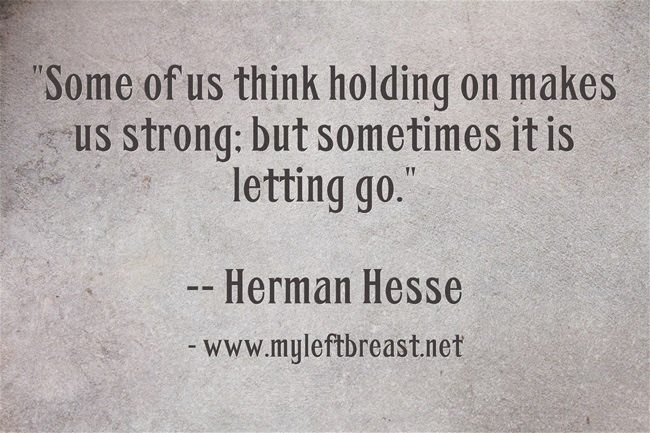 Done.  Moved on with that part of my life.  A nice feeling.

And of course, I had to celebrate in my now traditional post breast cancer landmark fashion, by stopping off for a cup of Dunkin’ Donuts.