You are here: Home / raising teenagers / Baby Rabbits in the Front Yard

Here’s the tale of the baby bunnies in our front yard.  Yeah, sounds awfully corny to me too, but I’ll try not to go all maudlin on you.

To set up the background, we’ve had a rabbit hole smack dab in the middle of our front yard for years, with nary a rabbit in sight other than the occasional full grown one hopping around at night once every few months, which I see when I take Tucker out for his last bathroom break of the day.  It’s not a very deep hole, and it sure appears to have been empty for years.

The kids (whose job it is to mow the lawn, now that they’re teens and all) mow the grass every few weeks and we’ve never seen a rabbit in there, or had any lawn mower/rabbit mishaps over the years.

Then (drumroll), this holiday weekend, as I was upstairs cleaning out a room (I’ve been in full-on “let’s clean out all the stuff from the house” mode lately), my now 6’1″ freshman son bounded up the stairs and burst into the room to announce, “I was mowing the grass and I mowed over a rabbit’s nest and there are bunnies all over the front lawn and I think I mowed over one!” 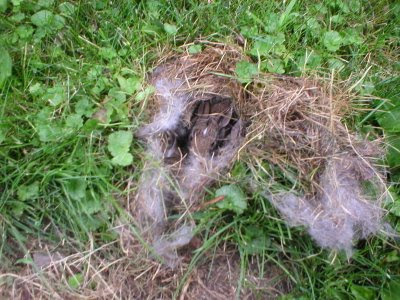 I gulped and ran downstairs to survey the scene.  There on the front lawn are my husband, my son and 3 tiny, little 2 inch sized newborn bunnies, all in various states of distress.  There was one very sad and sorry looking little injured bunny underneath the tree, about a foot away from the nest, whose head was pretty messed up.

Full disclosure: it was pretty horrific, the skin was all pulled back and there was a lot of raw, red skin showing.  I was pretty freaked out and at first glance I thought this one was a goner and was going to die in another minute or two.  But then I noticed it was still breathing and still moving around a bit, and looking pretty darned alert for a creature who’d just had a lawn mower run over it’s head.

Then, I saw the other one who was sitting outside of the nest about a yard away, completely frozen, not moving, statue like.  And there was another who was darting all the heck over the place, running feverishly all around the lawn in a panic.

My husband was standing nearby, with a large broom, shouting out orders about calling the police and what should we do and let’s do something soon!  So, I ran inside and called the police who, because I live in Mayberry RFD-like, bucolic little Clinton NJ, told me to call the local animal shelter, and then said they’d send their “wildlife officer” over to help.  Who knew we had an officer dedicated to wildlife in our tiny little town?

I called the animal shelter and they said they’d take the injured one (as soon as I saw it, I had decided immediately that if that sucker was gonna’ die, it wasn’t gonna die on our lawn in front of my impressionable 14 year old son, and if it had any chance in hell, I was sure going to try and save the poor little thing).  Then I asked them what they thought we should do with the other two.

After all, we still had to get the lawn cut and all and how could we with these teeny, tiny, adorable little baby rabbits running all over the place!?  I’d always heard that if you touch a wild animal baby, the mother will abandon it, and asked the girl at the shelter what I should do with them.  She said that was an old wives tale and that I should just pick them up and put them back in the nest.

Hmmmmm……easier said than done.  Those little suckers ran awfully fast.  So there I was running around the yard after them, trying to pick them up; dodging back and forth as the fast one zigged and zagged all over the front yard trying to escape my clutches.

I got the slower of the two and put him (her?) back in the nest and he/she promptly popped back out and hopped over and froze in position on the ground like a statue again.  Then I put her/him back in again and she popped back out again and then I put her back in and put some of her mothers fur from the nest back on top of her, and she finally stayed in the nest.  But the other one was still racing all over the place and literally popped back out of that nest 4 or 5 times before he finally proceeded to run and hide in the bushes in front of our house.

At that point about 15 minutes had gone by and I figured I’d better attend to the injured one and let the two healthy ones fend for themselves for now.  In the meantime, the Clinton town wildlife officer had pulled up and seemed completely flummoxed about what to do.  He kind of just stood there, without any idea of what to do other than to hand me a pair of rubber gloves to lift up the injured-head little bunny, so I went and fixed a little box up with a bunch of grass for bedding, gently placed the injured one in, and set off with my son for the animal shelter.

When we got there about 15 minutes later, I told them the saga and the woman started to go on and on about how it was a holiday weekend, and they’d have to take it to another animal habitat that actually had a doctor, but since it was a holiday weekend, she didn’t know who could take it and it could take a while, yadda-yadda-yadda, and meanwhile our little friend, the injured-head bunny, is laying in his box looking sorrier and sorrier, and I finally just cut her off and said “Well, where IS the place with the doctor, and why can’t WE just take the rabbit there?” at which point she looked at me as if that was a novel idea, and then gave me the address for the wild life habitat with the vet.

So off we went down another long winding road, to another dirt road, to a ramshackle little office in the back of a farm-like area, where we finally found a perfectly lovely women behind a desk in an office with all sorts of medical equipment which certainly looked official to me.  And she was happy as can be to take in our poor little injured-head bunny and even said, “It’s very positive that he’s so alert and still moving around at this point (which was about 45 minutes after the lawn mower incident),” and she seemed to think that perhaps our little friend might make it. 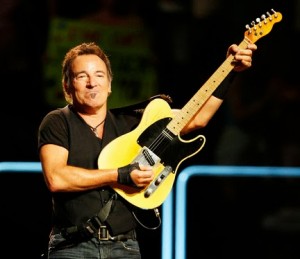 My son and I went back home, and I think we both felt a little better.  We weren’t really sure if the little guy was going to make it, but we sure gave it a hell of a shot and went all over creation trying to make sure he got the help he needed.  It was a nice little bonding expedition; we sort of connected in a way that is rare now that he’s a high school freshman.

And then that night, I went to a Bruce Springsteen concert in Philly.  And, as you can see, the little bunny incident with my son made a greater impression on me than the Boss did (even though it was a great concert and he played for 4 hours straight and I LOVE him).