You are here: Home / Grateful for My “Scotty Dog” Monopoly Piece
“Take care of your body.  It’s the only place you have to live.”
— Jim Rohn

This month I had to have a minor surgery on my left foot.  Mind you, whenever you use the word surgery, you really can’t include the word minor along with it; no surgery is ever really that minor, I’ve found.  But this surgery really did seem like it was going to be simple, so I didn’t plan that much for it, and deluded myself into believing that I’d be up and about immediately afterwards.  Other than planning for a ride home from the hospital, I didn’t do much preparing and didn’t expect it to be too big of a deal. 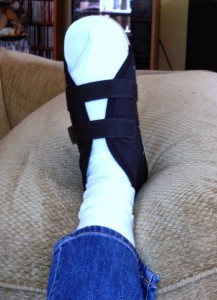 Then I had the procedure and afterwards the doctor told me I had to wear this lovely shoe/boot for 2 weeks, that I had to keep my foot elevated as much and as often as possible and that under no circumstances was I to get the foot wet, so I couldn’t take a shower for two weeks.  I literally laughed in his face and said “You’re kidding, right, no shower for 2 weeks?!  With these hot flashes?”  He didn’t seem amused, and said he was serious and that’s when I started to realize that this was going to be a major pain in the butt.

For the first 3 days after the procedure, I was hobbling around the house and couldn’t do much of anything and started to have flashbacks to when I was sick with chemo and after the reconstruction surgeries.  I suddenly felt helpless and weak, just like I felt during chemo but this time, I got really mad.  I was just not prepared to feel sick and useless again, the whole cancer thing just came right back at me and I got so freaked out.

I was furious about having to sit around with my foot up all day and bored out of my mind.  It felt so reminiscent of all those endless days of laying around during chemo, falling in and out of sleep, with no energy to do much more than one small task each day.  Only this time, the only thing between me and getting things accomplished was this stupid shoe boot, not chemotherapy.

Well, I wasn’t going to be at the effect of a wooden shoe, so I did what I did during chemo.  I googled it.  First I googled “How can you take a shower after foot surgery” which brought me to this awesome foot sleeve thingy on Amazon for only $13.00 which I promptly ordered and had overnighted so that I was able to take a shower the next day with not a drop of water getting onto the dressing. 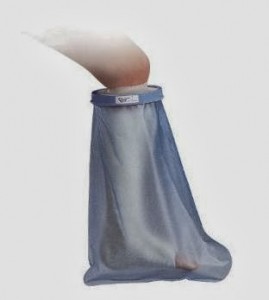 Next, I sent my daughter to the grocery store as I sat on the couch googling recipes.  I figured out that if I just stayed in one spot, I could stand, so I spent the entire weekend standing on one foot in front of the kitchen stove cooking and made enough food to feed a small army for a couple of weeks.  The family was happy about that.

It’s now 4 weeks later and my foot is completely back to normal and I’m able to do everything I could do before.  I’m very grateful for the strong body I have.  It’s done really well through all the things that have been thrown at it over the last few years.

I’ve always viewed my body as my “piece” in the Monopoly board game of life.  My theory is that I’m just hitching a ride off my body, my spirit is in here but the outer body is my “piece.”  When we played Monopoly as kids, I always wanted to be the Scotty Dog or the Top Hat, never the drudge-like Iron (housekeeping has never been my thing).  I’m very appreciative of my Scotty dog this week, she’s held up very well these last 3 1/2 years and I intend to thank her with a lot of walks and exercise this month, to show my gratitude.

Previous Post: « The 2nd Thing You Can Do to Help End Breast Cancer this October
Next Post: The 4 Books that I Found To Be The Most Helpful During Breast Cancer »