You are here: Home / Books / 4 Zings For The Circle By Dave Eggers 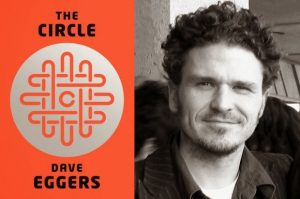 “You know how you finish a bag of chips and you hate yourself?  You know you’ve done nothing good for yourself.  That’s the same feeling, and you know it is, after some digital binge.  You feel wasted and hollow and diminished.”
— Dave Eggers, The Circle

I just finished reading the novel, The Circle by Dave Eggers.  It’s a book about a mythical social media company called The Circle in Silicon Valley, which is an amalgam of Facebook, Google, Twitter and Instagram all rolled into one.  Eggers is clearly not a fan of social media and creates a world which once entered, becomes impossible to escape.  The mantra of the CEO of The Circle is “All that happens must be known,” and Eggers proceeds to lay out a scenario where this quickly becomes a reality, in a sinister Third Reichian/Big Brother kind of way.  It’s a fantastic roller coaster of a ride; the world Eggers creates is all too familiar and very real and frightening.

It’s not my favorite Eggers book (that would be A Heartbreaking Work of Staggering Genius; oh yes, as the title implies, Eggers does have a highly developed sense of self worth, but rightly so).  The characters are not very well developed and are absurdly naive and willing to follow the leaders of The Circle blindly (although I suppose that’s what people said about Nazi Germany).  But the story is pretty amazing, and I think he’s terrifically brave to take on the currently popular world of social media.  Eggers is only 43, and a bit of a cool cat, part of the indie San Francisco crowd, so it’s an unpopular point of view he’s taken in this book.

After reading it, I did a little research (yes, I will admit, I used Google to do the research) and found out that while Eggers IS on Twitter, he’s only tweeted 2 posts.  And yet he still has over 6,800 followers, which is kind of funny (Jimmy Fallon and Ellen DeGeneres are followers).  So I guess it would be safe to say that he’s not a big fan.  He’s not on Facebook either, so he’s truly walking the walk of non-engagement in the social media world.

A brief aside, part of the reason that I liked this book is because I’m not a big fan of Twitter.  It’s way too short for me, too cryptic and nonsensical with all the hashtags and abbreviations.  I’m a big fan of words, so the 140 characters of Twitter never seem enough to me; I’m always agonizing over how to to shorten whatever it is I’m interested in tweeting.  It’s maddening and I can’t really get the hang of it.

I’m constantly surprised to find writers on Twitter; a recent surprise for me was when I found Joyce Carol Oates on there and she’s actually tweeting pretty frequently.  Oates is so damned prolific and her novels are so long, that I’m a bit shocked that she’s tweeting, but then again, she’s a really interesting person with a curious mind, so I guess she wants to figure the medium out.

But I digress, back to The Circle.   Even with it’s faults, it’s a worthwhile read.  Eggers has basically written the equivalent of George Orwell’s 1984 for the social media era, with his fatalistic story of how the world becomes over taken by The Circle and its leaders through their constant and ever present monitoring of every single detail of our personal lives.

His writing is so ferocious and so rushed that while reading it I was feeling the same way that I feel when I’ve had a 14 hour workday spent all online; my mind was racing and frenetic with slightly paranoid overtones.  In The Circle, the company encourages it’s employees to rate every thing they do on and off the job by “zinging” it, sort of like Facebook’s “likes” or Twitter’s “tweets.”

I’d have to give The Circle 4 (out of 5) Zings, just for the sheer passion and intensity of Eggers message, which is anything but subtle.  Now I’m going to get off my computer and go live in the real world for a few hours!