You are here: Home / Uncategorized / Memories of JFK’s Assassination

“Our most basic common link is that we all inhabit this planet.  We all breathe the same air.  We all cherish our children’s future.  And we are all mortal.”
— John F. Kennedy

I remember exactly where I was when I heard that JFK had been shot.  I was in 2nd grade in St. Agnes Grammar School in Clark, New Jersey when the announcement came out over the school loudspeaker.  The entire school immediately went into mourning.  Kennedy was the first Catholic president and the nuns loved him; they closed the school and sent us all home after the announcement, and I saw many of the nuns crying in the hallways as we left.

I remember sitting on the couch (a terribly uncomfortable, unattractive plaid convertible couch) in our wood paneled family room (this was the 60’s after all), watching with my mom while she ironed my Dad’s shirts as we sat glued to the black and white TV (with the knob to turn the channels as there were no remotes back then) while the news unfolded.  I was really young and wasn’t really aware of politics but we were Catholic and back then my parents were Democrats and they loved the Kennedy’s.

I remember my mother watching TV while furiously ironing those white shirts (she used to do the whole deal with the starch and all) and I could tell she was terribly sad.  It was one of the first times I’d ever seen her this emotional over something that wasn’t related to the family, and it was a very intense and curious thing for me.  I would sneak glances to watch her as she watched the TV; trying not to let her know how curious I was about her reactions.  It gave me a glimpse into her as a woman outside of the family and home, as a woman reacting emotionally to events outside the insular world of our family as I saw a side of her I’d never imagined before.

I have vivid memories of Walter Cronkite, a dour and stoic newscaster, reading the bulletin that was passed to him on air with the confirmation of Kennedy’s death.  He read the announcement, “From Dallas Texas, a confirmation that President Kennedy has died at 1:00 PM Central Time, 2:00 PM EST, about 30 minutes ago.”  He then took off his glasses and looked down and paused for a few beats and I could tell he was holding back tears.  It was an astounding moment for me, I’d never seen a grown man cry.  I could hear the crack in his voice as he continued with the story, even at that young age I knew he was trying not to cry on air. 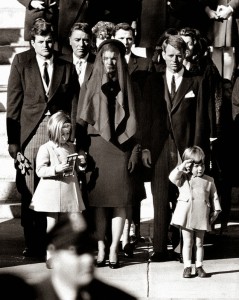 I remember Jackie’s pink suit and her little pillbox hat; I remember how she kept the same pink suit on during Johnson’s swearing in ceremony.  Her respect, dignity and poise throughout the entire ordeal was astounding, she did not miss a beat.  As a mother, I can’t imagine how she could express such grace throughout; she was only 33 years old and left with their two young children.  I recall the heartbreakingly poignant moment during the funeral procession through DC when she leaned down and whispered to tell John John, Jr. (that’s what we all called him) to salute his Dad’s coffin when it went by.  It was the saddest thing I’d ever seen at that age and still brings me to tears when I see footage of it now.

I had never seen such an outpouring of grief from adults before and the moment opened my 7 year old eyes up to human frailty in a way that nothing had before.  It was a very enlightening moment for me to realize that grown men and women could have such depth of emotion.

I wonder what the moment will be for my kids.  It might be 9/11, although we tried very hard to hide our fears from them when it was occurring because they were only 3 and 5 when it happened.  It might be the year I had breast cancer, which is probably the first time my kids ever saw me cry and realized my vulnerability.  I hope that whatever the moment is for them, it teaches them something about humankind and that they hold the lesson close, as I have for these 50 years.

Like Loading...
Previous Post: « An Inspirational Story of Breast Cancer From a 35 Year Old Woman In Portugal
Next Post: Dr. Susan Love Speaks About Her Own Experience With Cancer: When A Doctor Becomes a Patient »