You are here: Home / Uncategorized / My Mental Battle With An Elliptical Machine 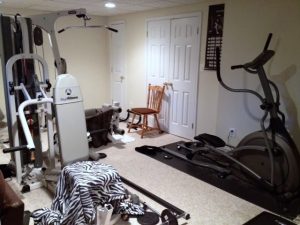 “Lack of activity destroys the good condition of every human being, while movement and methodical physical exercise save it and preserve it.”
— Plato

I haven’t exercised since January of 2010.  OK, I walk the dog a lot, but given his meandering around and the fact that he stops to sniff and pee on every single tree we pass along the way, I don’t consider it to be real exercise.

I had just managed to fit an exercise routine into my life in the last months of 2009, which brought with it a lot of wonderful side benefits like losing those annoying last 5 pounds I could never get rid of before, sleeping better, having more stamina and strength; the usual positive benefits of exercise.

I was really happy with myself and feeling excellent, starting an exercise routine had been a goal of mine for a while and I was happy that I could now check it off my list.  My favorite equipment was always the elliptical because I’d get the most bang for my buck out of that sucker, burning the most calories in the least amount of time, tightening up all the right spots like my butt and thighs.

But then because I had lost some weight, my breasts got smaller (that always seemed to be the first place I’d lose weight, annoyingly) and that’s when I found the lump in my left breast.

It wasn’t a mammogram, I had found it myself from brushing against it one night while reading in bed.  Since I’d lost weight, the lump was more prominent and immediately noticeable.

And that really threw me for a loop; the fact that I was doing all the right things and felt so healthy and then out of nowhere I discovered I had breast cancer.  I felt like my body had betrayed me; how could I feel so good and yet harbor such an insidious thing as cancer in my body?

And then of course, when I was going through chemo and all the surgeries, I wasn’t up for much in the way of exercise other than walking the dog. But then afterwards, I just couldn’t get myself back into a routine.

I know it isn’t logical, but I made a connection between exercising and the discovery of my lump. And whenever I’d start to get myself psyched up again to start working out on that elliptical, I would hesitate and come up with a million excuses.  Even knowing how illogical this thinking is, I was hesitant to get back on that elliptical given its connection to my lump (in my mind).

I’ve done all the reading and I know that it’s been well documented that diet, nutrition and exercise are some of the biggest factors in reducing breast cancer recurrence and I have been wrestling with this in my head for almost 2 years now.  I do all the other things; I eat healthily, have managed to keep my weight relatively stable, eat lots of vegetables, eat very little red meat, eat mostly fish, don’t eat junk food, have cut a lot of the sugar out of my diet, drink tons of water.  The only thing I hadn’t been doing was exercising.

I’ve spent countless hours trying to talk myself back into getting back in the gym with no success (and by the way, the gym is in OUR BASEMENT, so there is absolutely NO EXCUSE for me).

Then last week I was really pissed off about something that I couldn’t do anything about and all of a sudden I realized that the best way to deal with it would be to get on that elliptical and sweat all that annoyance and anxiety out of my system.

And it was as simple as that.

I’ve been on that baby every day since and am already feeling better, more relaxed, have more stamina and am experiencing that emotional bliss you get from the endorphins you release while exercising.

Who know, maybe I’ll lose that extra weight I’ve been complaining about so I can get back into my skinny jeans for the winter.

Previous Post: « How I Unveiled My Reconstructed Breasts For the First Time and Probably Scarred a Young Boy For Life
Next Post: An Inspirational Story of Breast Cancer From a 35 Year Old Woman In Portugal »