You are here: Home / Christmas With New Pets
Christmas was a bit of a let down this year; a little anticlimactic.  Now that the kids are 16 and 18, there’s no mystery about the day.  They both asked for very specific gifts and didn’t want any surprises.  Unlike Christmases in the past, they both slept late.  They used to get up at dawn on Christmas morning; this year they got up around 10:00.
In the past, Christmas morning used to start with the kids bursting into our rooms around 5:00 a.m. screaming with excitement, “Santa came and he left us so many presents!”  Mike and I, bleary eyed after a night of wrapping and lugging gifts up from their hiding place in the basement to put under the tree around 2:00 in the morning depending on how late the kids finally fell asleep, were always exhausted but would drag ourselves out of bed and downstairs for some coffee, while setting up the video camera on the landing to record all of the festivities and then the ritual opening of the gifts would begin. The kids would go crazy with excitement, giddily unwrapping packages and throwing the paper in the air with abandon. 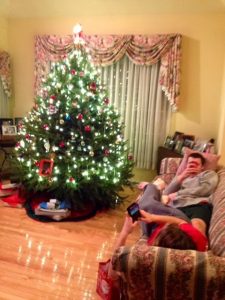 This year was very different.  They told us exactly what to get them with links showing me where to order them online, which frankly made it all very easy for me as packages with their requests arrived daily up until Christmas Eve day.  I never set foot in a mall the entire time, which was a relief. God, how I used to hate going to Toys R Us during the holidays!
But…..it wasn’t as fun.
We still did the obligatory unwrapping of the gifts, but it was kind of boring and no one got all that excited. The kids sat around with their heads buried in their iPhones for much of the day and as soon as our guests left, both of them ran up to their rooms and closed their doors to do whatever it is they do in there these days.
This whole growing up thing has me a bit disoriented.  It’s odd how your whole life revolves around your kids for 18 years and then all of a sudden, they’re grown up and you’ve done your job.
I was taking it all really seriously and turning it into something VERY IMPORTANT in my mind, feeling all worried and obsessed about how quickly they’ve grown and did I just let the years fly by, were they growing up too fast, were we bad parents?

And then today while I was out at the movies (to see American Hustle which is REALLY intense although disturbing and Christian Bale and Amy Adams should definitely get Oscar nominations for their performances) the kids went out for a while and came home with:  PET RATS.

Yes.  You read that correctly.  Or, as my daughter pointed out, FANCY RATS, as if such a thing existed. Believe me, there is nothing fancy about rats.  They are rodents and should not live in homes and especially not in MY home.

The rats have been named Barnabas and Clarice, although the kids swore to me that they were both females. The kids thought I would be mad, but I’m not.  I’m mostly just relieved that they’re still so young and silly that they would want to buy something as weird as a pet rat.  And that they still care what I think.
I have laid down the law; I will NOT be doing any taking care of the rodents.  Now let’s just see how the cat reacts.