You are here: Home / Books / A Review Of Donna Tartt’s The Goldfinch 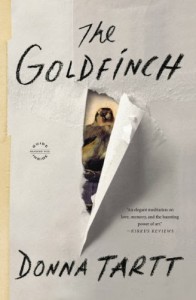 “The first duty of the novelist is to entertain.  It is a moral duty. People who read your books are sick, sad, traveling, in the hospital waiting room while someone is dying.  Books are written by the alone for the alone.”
— Donna Tartt

I recently finished reading The Goldfinch by Donna Tartt.  Tartt has only written 3 books in her life, each one more well received than the previous.  Having read all three, I believe that The Goldfinch is her finest.

Tartt started writing in her early 20’s and has taken 10 years to write each book, not surprising when you read her work which is beautifully written, brilliantly researched and very long.  She’s one of the finest writers I’ve ever encountered, but The Goldfinch is not light reading and takes a certain level of commitment as at 700+ pages long, it requires quite an investment of time to read.

I agree with the critics who say that The Goldfinch is Dickensian in it’s scope.  It’s also very Tostoy-like in it’s realistic style and dour take on the world.

The story begins as Theo Decker, a young boy of 13, goes to the Metropolitan Museum of Art in New York City with his mother to escape a rainstorm.   There is a terrorist bombing at the museum and many people, including Theo’s much loved mother are killed.

The balance of the story follows Theo as he struggles to find a place to call home and reconcile the loss of his mother.  He first winds up at the home of one of his wealthy young friends in New York City.  Although he’d like to stay with this complex family, he’s spirited away by his alcoholic gambler father who had left his mother years ago, who brings Theo to his home in Las Vegas.

The scenes in Vegas are brilliant, Tartt’s description of the strip is so vivid and surreal.  In Las Vegas, Theo meets Boris, a Russian born teen who becomes his best friend.  These two young teenagers are pretty much left to raise themselves and quickly fall into into a surreal drug and alcohol induced world which is disturbing, although fabulously written.

Later he returns to New York City where he meets up again with the wealthy family he stayed with after his mother’s death, as well as a furniture restorer named James Hobart, another wonderful Dickensian character and the moral center of the novel.

Behind the story is the over arching subplot of the Fabritius painting, the Goldfinch, that Theo has stolen (or rescued) from the terrorist bombing in the museum.  It becomes a symbol of longing and loss in his life, and a reminder of his mother who loved art almost as much as she loved her son.

The novel is full of mostly unanswerable questions about life and art and is so amazingly well written that it’s a must read.

Next up, I’m about 100 pages into Signature of all Things, the new novel by Elizabeth Gilbert.  A review on that will come soon.