You are here: Home / My Bingewatching Obsession with ‘Sons Of Anarchy’ 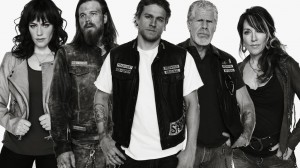 I’ve been watching obsessed with Sons Of Anarchy on Netflix for the past few months.  I’m well into Season 4 and am fascinated by the sheer awfulness of the story.  I say awfulness because the plot is truly horrifying, not because the show is awful.  The show is a wild ride about a club of outlaw bikers in a fictitious little town called Charming, California.

Here’s my SOA guide, with commentary, to help you decide if you want to start watching.

SPOILER ALERT.  There are some plot twists revealed, although I personally figured out most of this stuff before it happened and if you like this kind of high drama, I doubt that it will take away from your viewing enjoyment.

1.  The club is called SAMCRO (Sons of Anarchy Motorcycle Club Redwood Original) and it took me almost half of the first season to figure that out.  I kept hearing them talk about SAMCRO, but misunderstood them to be saying Sam Crow, and was wondering who this mysterious Sam Crow character was.  I finally had to look it up online and good old Wikipedia helped fill in the blanks.

2.  Oh, and you should know that SAMCRO’s main source of income comes from gun running.  And the local police are sort of okay with that, because they say that SAMCRO keeps the town safe.  Not the smartest local police department in my mind.

3.  The plot centers around the son of one of the founding members of the club, Jax Teller, who is conflicted about the direction the club is taking.  Jax is played by Charlie Hunnam who was the original lead in Fifty Shades of Grey, but he backed out.  I think that was a smart choice if this show is any indication of his acting chops; most of what he does involves yelling really loudly and beating people up within an inch of their life.

He is however, very sexy if you can get past the greasy hair and baggy jeans that he wears in every single episode, along with his biker jacket or “cut” as we SOA aficionados, like to call it.

(Pet Peeve: Why does Jax wear white sneakers?  Don’t all bikers wear s**t kicker boots?  This drives me crazy throughout the entire show.  These are the kinds of things that get in my head and I can’t get them out).

4.  Jax’s mother Gemma, is played by Katey Sagal who takes the role way over the top.  She’s the quintessential bad-ass biker chick, and the matriarch of the club.  Her character has some of the funniest lines in the show and also some of the most evil moments.  Plus she really rocks those tight jeans, lacy black tops and pointy heeled boots for a woman over 50.

5.  Then there’s Clay, Gemma’s husband and Jax’s stepfather.  Clay (Ron Perlman) is the President of SAMCRO and through flashbacks you realize that he and Gemma killed Jax’s father. He and Jax have a love/hate relationship, of course.  It’s a little Oedipal in nature, although I’m not really sure if that’s what the creator was going for.

6.  The main theme of the show is Jax’s inability to make a choice about whether to stay in the club or not. He waffles back and forth between everything; by Season 4 it’s becoming almost humorous to watch.  In almost every episode, one minute he decides he’s getting out of the club, 20 minutes later he’s more committed to the club than ever.  One minute he loves his girlfriend Tara, the next he’s telling her to leave Charming for good.  The show is so over-the-top crazy that it’s funny, especially when I’m binge-watching it at a clip of 4 shows a day which I did throughout the holidays.

7.  Women in the world of SAMCRO are called “old ladies.”  The old lady is there to keep her man happy, to cook, have lots of sex and never to question his decisions.

Clearly I would never make it as a biker chick.

9. They also manage to squeeze in the IRA, kidnappings, a  few biker weddings and prison life.  And if you’re a Stephen King fan, he made a cameo as a “cleaner” who took care of a body they needed to dispose of in Season 3 and did a respectable job of looking like he knew what he was doing.  Apparently he’s a big SOA fan, it seems right up his alley.

I don’t know about you, but most of my clubs don’t inspire quite so much passion.  Then again, I’m not a big joiner, mostly I’ve been in book clubs….

From my perch in our nice little central New Jersey suburbia home, I while away hours on the couch, watching these crazy characters make bad choice after bad choice, screaming at the screen of my iPad, “No Jax, don’t do it – that drug cartel is going to kill all of you!  Once you’re in with the drug cartel, there’s no getting out!” as if I have any idea what I’m talking about.

It’s a crazy, wild ride and I’m hooked.  I’m about mid-way through Season 5 where they just introduced Jimmy Smits, a favorite actor of mine.

Have any of you seen SOA?  What do you think?  No spoilers about Seasons 5 or 6, please 🙂

Previous Post: « Stepping Out Into The Unknown
Next Post: The 7 Things I Wish I Knew When I Was First Diagnosed With Breast Cancer »