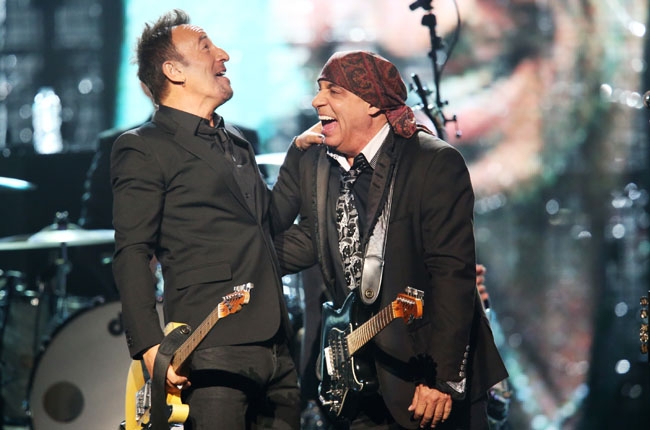 On Saturday we watched the 2014 Rock ‘n Roll Hall of Fame Induction Ceremony.  It was filled with a gold mine of icons from my youth like Peter Gabriel, Linda Ronstadt, Cat Stevens, Hall & Oates, The E Street Band and Nirvana.  OK, so Kiss was also inducted, but I’ve never been too big on Kiss.

Man, those guys are getting old!  Peter Gabriel acknowledged all of the many other musicians he’d collaborated with over the years, saying, ” Music should come with a health warning; it can be so dangerous; it can make you feel so connected, and can make you think the world could and should be a much better place.  And it can occasionally make you very, very happy.”  He brought out Youssou N’Dour to perform “In Your Eyes” and they both brought a sweet, ethereal passion to the stage.

Cat Stevens seemed a bit embarrassed to be honored, but watching his performance reminded me of how much his music spoke to me when I was in my teens.  I wrote a paper on “But I Might Die Tonight” in High School and had a long discussion with my English teacher at the time about the meaning of life, which I can still remember fondly.

Linda Ronstadt is ill with Parkinson’s disease which is a huge loss and she wasn’t able to attend but the all star group of women performing her songs sounded awesome: Stevie Nicks, Sheryl Crow, Emmy Lou Harris, Bonnie Raitt and Carrie Underwood.  Carrie sang her heart out, impressive for someone so young, collaborating with such a group of heavy hitters.  It gave me a new found respect for her. These women have all weathered life as older rockers pretty well, considering the smoking, drinking and hard partying rock ‘n roll lives I’m sure they’ve all experienced, their voices are still strong and full of emotion.

Hall & Oates were great with their Philly soul sound, as always, although I had no idea that John Oates was quite that short.  He’s an eloquent and gracious speaker, more so than Daryl Hall.  The E Street Band was, of course, wonderful and stupendous.  I’m a long time fan of Bruce Springsteen, ever since my younger brother turned me on to his poetic lyrics in my 20’s.  Bruce gave an honest and moving speech about the controversy behind his initial induction without the band and then they showcased each of the members of the band solo, against a backdrop of “Kitty’s Back.” The most intense moments in their set were when they talked about missing Clarence Clemmons, and how he would have loved being inducted into the Hall of Fame.  His widow gave a sweet little speech about how he was known for being “the Big Man” for many reasons, which brought the house down.

The Nirvana set was really fun.  I thought I’d hate it, it’s sort of the antithesis of what Kurt Cobain stood for, but the young performers who joined Dave Grohl and Krist Novoselic on stage were fantastic and you could tell they were all having the time of their lives.  Dave Grohl has become one of my favorite performers, his honesty and obvious passion for what he does comes through and he was a beast on those drums!  Novoselic reminded me of a big bear, playing away soulfully on the accordion, of all instruments, for “All Apologies.”  Lorde sang a version of it that gave me goosebumps.  I suspect Kurt would have been happy to have her do the honors.

And of course, Courtney Love had to show up, spewing inanities into the mike and trying to get everyone on the stage to hug her.  Dave and Krist graciously, but uncomfortably, hugged her back.  Man, she’s still a wreck.

I love the music of that time, it made such an impression on me growing up.  The passion and rebellion were so linked to my own life as I grew up rebelling against my parents and my Catholic upbringing.  Last night reminded me of how much music meant to me at that age, and still does. I hope you all get a chance to watch it!

To subscribe to My Life Breast, enter your email address in the box below: