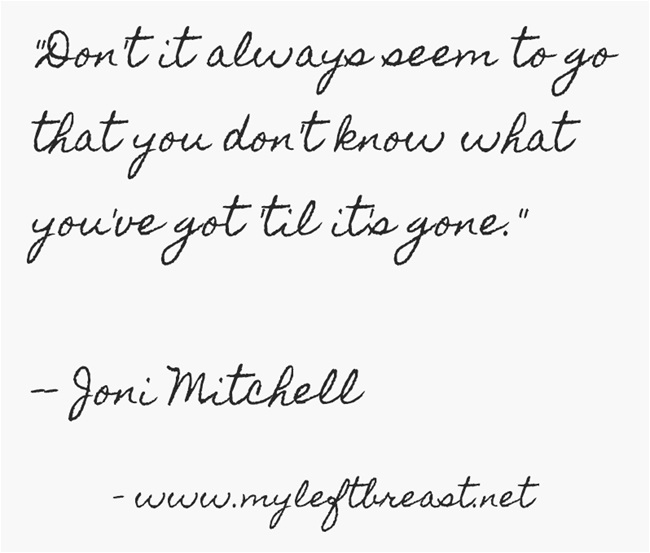 One of the things I wish I’d handled differently in my breast cancer process is that I wish I’d had this one plastic surgeon who was touted as being “the best” in the area, perform my breast reconstruction.  I had a couple of meetings with him, we had agreed to the type of procedure (expanders with implants) and we even scheduled the mastectomy/reconstructive surgery which was going to happen together with my breast surgeon.

But he was out of network.  I’m new to the world of plastic surgery and didn’t realize that the “really good ones” are usually not in network, and often don’t want to get involved with insurance companies since a good amount of their surgeries are elective and not covered (think breast augmentation).

When I first talked to his office staff about the procedure, I got the impression that the 20% non-insurance-covered portion of the procedure would fall in the range of about $5,000-$6,000 and figured that I would be willing to pay that much for such a complicated surgery, especially given how much the nurses at the hospital raved about how wonderful this particular surgeon’s reconstructive work was and how great his patients did afterwards.

I didn’t know what to say to the woman on the phone and was just plain dumbstruck while she went on about how they could put me on a monthly installment  plan and I could pay it off over a few years.  All I could think about was how my daughter was going to be driving soon, and would need a car and how this surgery sort of felt like I was depriving my daughter of the car given the price.  In my weirded out state of mind, I kept thinking I would be walking around with what amounted to the cost of a car on my chest.

I was so upset and was really kind of mean to the billing woman from the plastic surgeon’s office, saying she should have let me know this way sooner, how could they tell me this NOW, this should have been explained a lot earlier in the process.  The last thing I wanted to do was pay a monthly fee for something that I didn’t even want, it would just be a horrible reminder of something I didn’t want in the first place.  The whole notion of the reconstruction just hit me square in the face.

I didn’t really want new breasts, I wanted my same old ones, but sans cancer and nothing she could say was going to make me be willing to pay $20,000+ dollars for new ones.  And the idea of having to make monthly installments on new breasts that I didn’t even want, just made me nuts and I told her to cancel everything and that I would have to find someone else in network.

Then I hung up the phone and went a little crazy for a few hours; screaming and crying and just hitting things.  It was one of the only times I really lost it during the whole process.

But then after a while I calmed down and called up my breast surgeon and asked her office for a referral to another plastic surgeon who would be in network and we found the one that I eventually went with.  And his work was good and I’m okay with the result.  My new fake breasts look fine under clothes and are proportioned and I can wear a bathing suit without anyone really noticing that I’ve had reconstruction.

But.  I think that if I’d had this other “best in the state” plastic surgeon perform the procedure, maybe I wouldn’t have the level of discomfort that I still have from my current reconstruction.  They’re tight and depending on how I’m sitting or what type of chair I’m sitting in, I feel a lot of pulling and tugging.

I love to read in bed, and I can’t really get comfortable anymore in a soft bed, I now can only be comfortable in a hard back chair, so now I can’t really read before I go to bed at night anymore.  It’s also very hard not to hunch my shoulders because of the tightness of the implants.  I frequently wonder, now, if I had had the other surgeon if perhaps I wouldn’t have the same discomfort.

Two of my friends who later had breast cancer had the expensive surgeon (he was in their network) and both are very pleased with the results and neither of them have the same tugging and tightness that I do.  I also think that if I’d had the expensive surgeon, I would have less scars, or maybe smaller scars because of how many procedures he’s done and how expert he is in this area.

Please ask for referrals; ask your friends who’ve had breast cancer who they would recommend (believe me, anyone you know who has had reconstruction will be very open and candid about it with you.)  I was actually kind of shocked at the number of women who shared their very intimate surgical stories with me. There’s nothing like a first person recommendation when going through breast reconstruction, so ask your friends, ask your doctors, ask around.

If you’re reading this, and considering breast reconstruction, please think of the long term repercussions.  Learn from my mistakes and figure out how to get the very best plastic surgeon you can find.  In retrospect, I think I should have let the “expensive” plastic surgeon do my procedure and cost be damned.  But since I can’t change my own outcome, perhaps by sharing, I can help encourage you to make the right choice.