I have rarely been as excited about a new documentary film as I am about “Cancer: The Emperor of All Maladies,” by the wonderful documentary film maker Ken Burns, which will air on PBS channels on March 30th, 31st, and April 1st, 2015. The 6 hour documentary is based on the award winning book of the same title by Siddhartha Mukherjee. 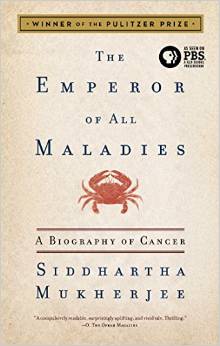 I read the book the year of my treatments and it is absolutely fascinating and beautifully written. Mukherjee, a hematologist and oncologist by training, received his undergraduate degree in Biology at Stanford, a Rhodes Scholarship at Oxford University, his Doctor of Medicine degree from Harvard Medical School, followed by an oncology fellowship at Massachusetts General Hospital.

It was during the oncology fellowship that he began his research into the history of cancer as he tried to learn more about the illness that despite treatment breakthroughs, has remained largely a mystery since the days of ancient Egypt when it was first recorded in medical records. Mukherjee writes about the disease of cancer as if he’s writing a biography of the illness; this Pulitzer Prize winning book reads like a novel.

The prominent researchers and doctors featured in the film share their sense of excitement and optimism about the current state of cancer research, many of them describing this era as a true turning point in our understanding of cancer.  Mukherjee shares that, “We are finally beginning to understand cancer at the cellular and molecular level and are on the cusp of a breakthrough.”  Dr José Baselga from Memorial Sloan Kettering boldly states, “This is the moment for cancer, it’s happening.”

Of course, on a personal level, I want this to be true and watching the trailer below has gotten me more upbeat and excited about the current state of cancer research than almost anything I’ve read or seen to date.

The video below also reveals that the project is quite personal to Burns, as his own mother was diagnosed with cancer when he was only 2, and in fact died of cancer when he was 11 years old, making this a true passion project for him.  He shares that his mother’s cancer informed his life and his passion for film-making, and says that in a way, he simply couldn’t turn away from this project and felt that everything led him towards it.

Below is the preview of the film, which will give you the sense of excitement and energy that Burns and Mukherjee bring to this very complex and mysterious disease.  I would encourage you to read the book and watch the documentary.  I know that reading the book gave me a much better grasp of the history of the disease as well as a better understanding of both the challenges and successes researchers are facing today.  I truly believe we are at the tipping point of research and understanding of the cause of this disease and hope that this video will inspire new and young researchers to join the search for a cure.