You are here: Home / Family / Did I Do A Good Job Parenting My Kids? 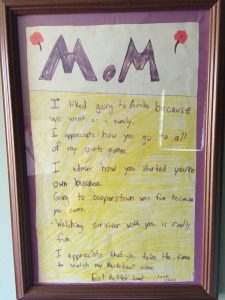 My son made me this card in school for Mother’s Day 2010 and it hangs on the wall of my office. I remember the day I got it framed, mid-way through chemo. I cried that day at the framers, so overwhelmed by emotions. I was bald, I was weak, I was scared. But I was so happy about the card.

Since that day, it’s been hanging on my office wall, and to be quite honest, it creates conflicting emotions every time I see it.

I’ve always been a full-time working mom. And with that has come so much guilt and angst about whether or not I did enough for my kids, whether I spent enough time with them. For the past 19 1/2 years I have worried about whether they will remember me as an active participant in their lives or one of those distant moms, who was just there for tasks and chores and reminding them to do their homework.

I’m not someone who is good at playing. Instead I work, I clean, I organize, I do chores, I plan the college funds. I was never very good at just hanging out and relaxing, playing ball, doing arts and crafts, cooking together, relaxing together. It’s not my comfort zone, I feel awkward in those types of activities and have never been very good at them.

I would see the other moms at the baseball and basketball games who always seemed on top of the schedules, and who often volunteered to be team moms or classroom moms and I wondered if my kids were going to think of me as not involved. There were quite a few times when I couldn’t remember where the game was supposed to be and showed up late or went to the wrong field. I’d wind up texting the other team moms to ask them where the game was, wondering why I could never keep on top of the sports schedules when I could always keep my work schedule organized.

Did I make the wrong priorities? Will they remember me, the way I remember my dad, as a nice but somewhat removed parent who was more comfortable at work than at home? Or like my mom, who was always stressed, often angry and never seemed to be able to relax?

My husband has always been the coach.  For about 9 years he coached Little League along with Rec Basketball and spent hours and hours with my son and his friends at games and at practice. I would go to most of the games, but never really felt like I was in the thick of it, always felt a bit of the outsider since I’m woefully unsportsmanlike and often have no idea of what’s going on on the field or court.

This year my daughter is a Freshman in college. My son is a Junior in High School. These high school and college years go very quickly as so many of my friends warned me.

The other day, I was grumbling to myself about doing my sons laundry, worrying because I still haven’t infused in him the ability (or desire) to do his own laundry. And it suddenly dawned on me that I have about 15 more months of this before he’s off to college.

The year I was so sick, I longed to be able to clean their rooms, to do their laundry, to keep involved with their lives because I was simply too exhausted and sick to do much more than lay around sleeping and watching TV.

That first year after all the treatments ended when I could actively parent them again was so sweet. But, like many other things in life, it soon became yet another series of chores; the endless cleaning, cooking, driving and parenting that comes with having teens. And now I’m keenly aware of the fact that it will soon be done. And wondering if I’ve done enough.

I look at the young people they’ve become and am eminently proud of them. They’re smart, funny, compassionate, loyal, grounded, honest and true to themselves. I think a lot of that is nature, but am sure some of it is nurture, and that I’ve contributed to it.

“There are only two lasting bequests we can hope to give our children. One of these is roots, the other, wings.”
–Johann Wolfgang von Goethe

Previous Post: « What To Consider When Determining Your Chemotherapy Regimen
Next Post: The Great French Adventure: Part 1 »