You are here: Home / Travel / The Great French Adventure: Trip to the Local Gendarmerie 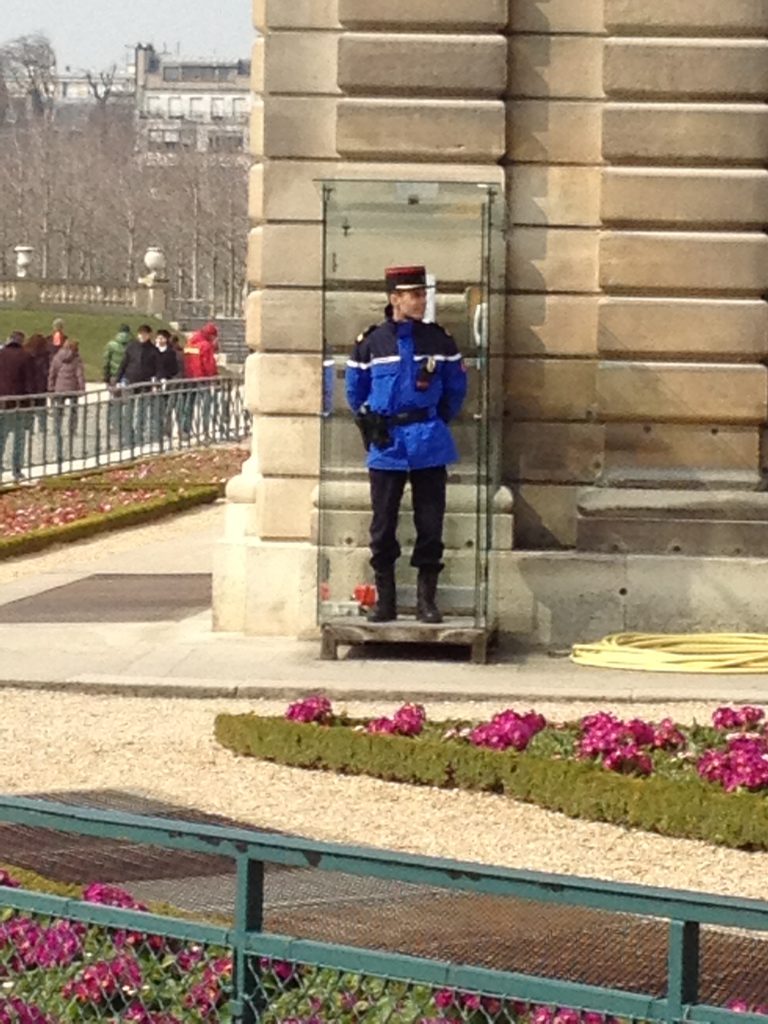 After my experience with the Parisian pickpocket community, I began to take notice of the local police or “gendarmes” as those of us in the know call them. Let me just say that they are quite a handsome bunch. They have these snappy dark blue uniforms with epaulettes and stripes, which are tailored and fitted. They’re way nicer than U.S. police uniforms and quite stylish. Plus they have these cool hats, that are called “kepi” which have a flat circular top and a straight visor, which I find to be quite spectacular.

Much to my dismay, I neglected to take any pictures of the gendarmes that I spoke to during the week, but here’s a picture I found from my trip in 2013 to show you just how splendid and stylish the hats are. This guy was wearing a jacket over his uniform, so you don’t get the full affect, but he still looks pretty snazzy, at least way more than our U.S. cops, eh?

I had asked several policemen, during the first few days, where I could go to report my wallet being stolen and they all assured me it was a quick process and that I could go to any local station near our hotel. So on our 4th day, after breakfast, I decided I was going to go get a police statement so that I had it on record in case I needed it once I returned to the U.S.

First, let me confess that my timing could have been better. In retrospect I realized I should have gone to the station as soon as I woke up that day without the rest of the gang, so that I wouldn’t inconvenience the whole group but….the best laid plans, eh? C’est la vie. So, I decided sometime around noon that I really felt the need to go to the station and get this paperwork on file, and the four of us trooped on over to the local police station on rue de St. Germain.

At first things seemed to be promising as I was quickly told to sit at a desk right at the front to fill out a form explaining le pickpocketing crime, which took just a few minutes. I was optimistically thinking we’d be done within minutes, and relieved that I hadn’t completely screwed up the whole day’s schedule.

No one in the station was very fluent in English, and only spoke un peau, so communication was a little tricky. I know very basic conversational French but was a bit limited in my knowledge of crime related French dialogue so conversations were pretty limited and I tried to explain what had happened with lots of animated facial and hand gestures and a lot of smiling and throwing of my hands up in the air as if to say how stupid was I to be pick pocketed?

I wasn’t quite sure if they understood me, but somehow after the clerk reviewed my paperwork, I gathered that I was to meet with a detective to be formally interviewed. “How long?,” I asked, but only received quizzical faces and some shoulder shrugging as if to say, “Who knows?” And I gathered that there were a few others in front of me, including a woman weeping while on her iPhone next to me, who seemed to have had something very important stolen.

I made up a complicated story about her (I always make up stories about what’s going on, and am convinced I’m absolutely accurate, only to be told by my friends that it’s most assuredly way less involved than the story I’ve fabricated).

So the story I made up, and I’m sticking with it, is that she was a young musician with a performance that evening, who’d had her instrument stolen on the subway. She was weeping because she was trying to figure out how she would find her instrument so that she could still perform that evening and was very distraught that she wasn’t getting any help or support from the gendarmes. In my story, I envisioned that she was scheduled to play at the opera that evening.

Or maybe she lost her gown. Whatever.

It was pretty clear that she had lost something important and was extremely upset about the whole thing, and while les gendarmes were sympathetic, they kept shrugging their shoulders as if to indicate that there was nothing they could to do to help. I felt very badly for her and kept throwing concerned and empathetic looks her way.

This whole little drama I had made up was keeping me pretty occupied as I continued to sit there waiting for my turn to be interviewed about “la crime.”

Meanwhile, unbeknownst to me, Mata Hari, Gloria Steinem and Truman Capote were all having their own little drama going on across the street at a local cafe while they (patiently) waited for me to get the heck out of that police station.

Seems they’d ordered wine and snacks at this little cafe across from the station, and what with those tiny, wobbly outdoor cafe tables and all, Truman managed to promptly spill his entire glass of red wine all over Gloria’s brand spanking new, beautiful white jeans. She was NOT amused. Things were getting very tense out there among the 3 of them.

Time was dragging along inside the police station so I pulled out my trusty iPhone and typed into my iTranslate app: “How long will it be,” and “Am I next?”  That worked pretty well until the clerk then assumed I could speak French and launched into a lengthy answer in French, which of course, I couldn’t understand.

Eventually a young detective came out and called “Claudia?” at which I leapt up and said, “Oui, c’est moi!” and followed him back into his office where he questioned me about the details and acted quite disgusted with me, as if I should have known better. Again, since he didn’t speak a lot of English and I didn’t speak a lot of French, it was a comical discussion but somehow he seemed to get all of the details logged into his computer, printed out, stamped and signed; all very formal and impressive.

I breathed a sigh of relief, grabbed my copies and headed out of the station, looking for mes amis. When I found them, they were all quite annoyed.

Now, mind you, they all flew across the world just to make me happy, so one could easily see why they were so annoyed at me by this point. I’d taken a good 2 hours out of a day where we could have been sight seeing to get this done. So, I apologized and tried to figure out what they were so upset about at which point I started to hear all about the red wine on the white pants and several other little complaints that they had about each other.

We’d come to the point in a trip where we were all starting to drive each other crazy so we paired off in different sets of 2 than we would normally migrate to and all gossiped about the others for a while until we got back to the hotel so that Gloria could change out of her wet, red spotted jeans and then we decided to take a boat ride down the Seine followed by a late night bus tour of the Eiffel Tower and other landmarks, which was quite fun and relaxing and everyone calmed down so that we could go have a lovely dinner on the Champs Elysee.

Boats along the Seine

Fantastic bridge sculptures along the Seine 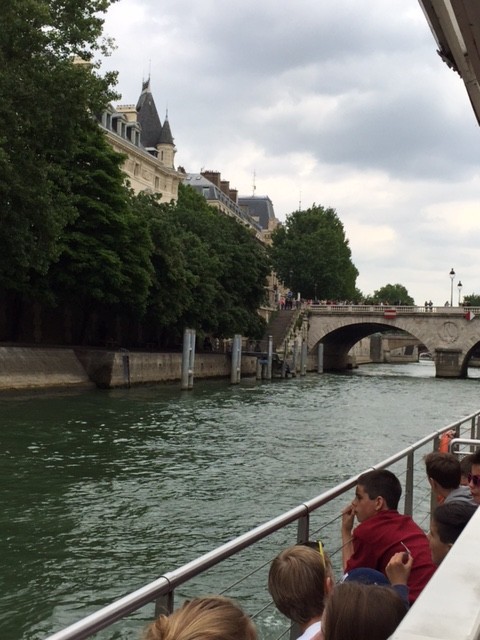 Boat trip along the Seine with lots of school children 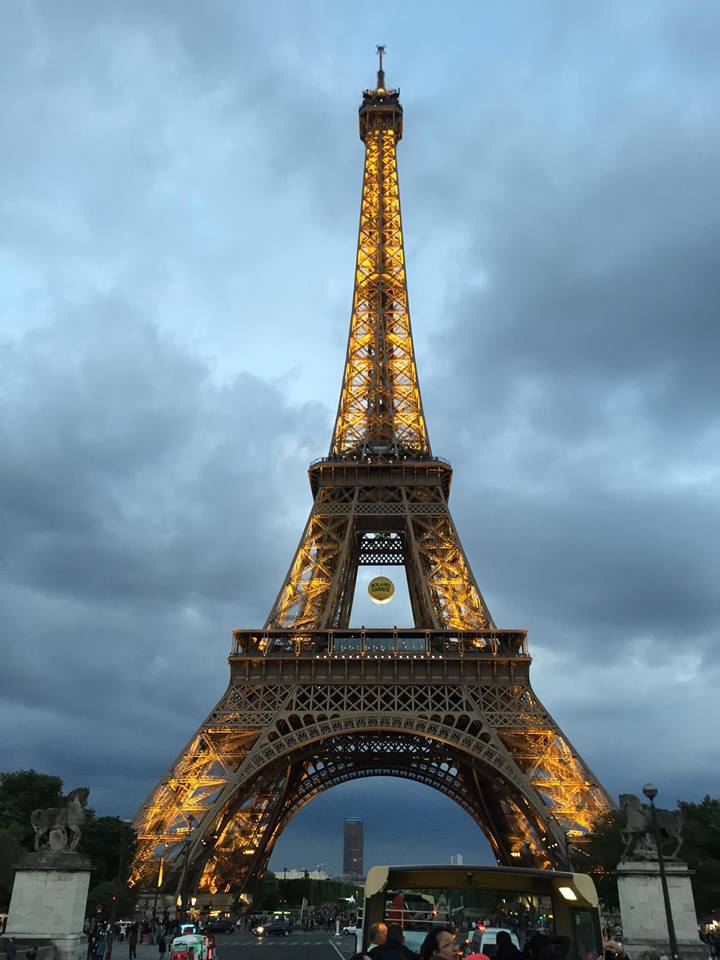 And all was well with the world, again. Tomorrow, Notre Dame.