You are here: Home / Family / Memories Of My Grandmother’s Cooking 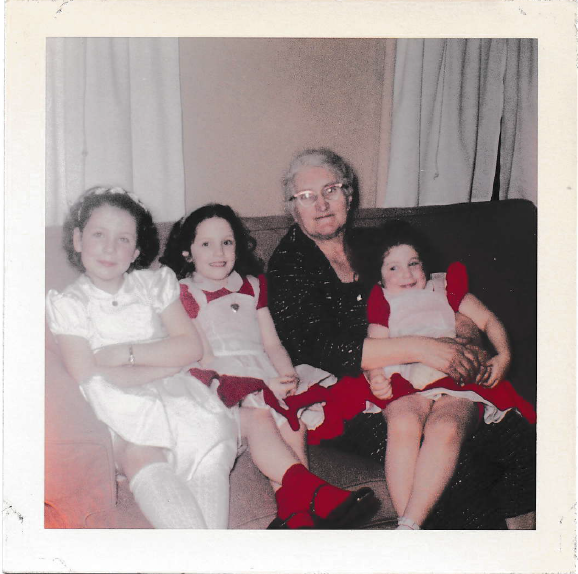 As we’d enter the hallway of her apartment building, the smells of Grandma Schmidt’s crispy fried potatoes and roasted chicken would float down the stairwell so strongly that we’d all begin to salivate within moments of walking in the door. We’d talk about it on the way up the stairs, murmuring among ourselves about how the other neighbors in her building must be envious of us because of the mouth-watering smells of the meal we were about to enjoy.

She proudly cooked everything from scratch, unlike my mother. Nothing was ever frozen or pre-packaged. I was fascinated to watch her as she’d cook; sweat dripping from her red, flushed face as she strenuously worked at creating her feast, measuring ingredients out with her metal measuring spoons from big white metal canisters.

Some days if we were lucky, she’d bake us her famous home-made chocolate chip cookies.  My two sisters and I would gather around her as she measured and combined all the ingredients and then mixed them together by hand, never using a mixer. Once I asked her if I could try to mix the dough myself, and when she let me, I could barely even move the spoon, the dough was so thick and dense. I realized how strong she was, this grammar school educated, barely literate peasant from Germany who came to America on a boat at the age of 13 without her parents.

Even her cooking implements were strong: the heavy black skillet to fry the roasted potatoes thick with onions and seasonings, the large blue and black metal covered dish for the roasted chicken.  The kitchen would be steamy and hot, smelly and intoxicating.

When we were young kids, my parents would take us to Grandma Schmidt’s house when we got sick. Both of them worked, so they’d drive us to her home about a half hour away and drop us off in her capable hands. She’d dote over me, welcome me inside and ply me with food. What did I want her to make? Surely if I was sick she could make me better by feeding me some of her wonderful, home cooked food. In Grandma Schmidt’s world, everything could be made better with food.

The home-made chicken noodle soup, the broth rich with flavor, the bits of celery and carrots cooked just right, not too soft; the home-made noodles soft and light in my mouth. There were days when I knew I wasn’t really sick but told my parents that I was anyway, just so that I could spend time in the warm cocoon of food and love that she created.

She came to the United States from Germany at the age of 13 by herself, married, had a family and raised 4 children with a sick husband, who died in his early 60s, leaving her with the task of raising and supporting the family by herself.

Grandma Schmidt and her cooking were the only outward expressions of love and affection in my family. My parents were cold and unemotional with us when we were young, she was warm and physically expressive of emotions. On the surface, she was a grammar school educated peasant who spoke in broken English, but in reality she was the strongest woman in the family.

Grandma Schmidt taught me that women are the ones who you can depend on, who are stronger than men. When I was with her, I felt unconditionally loved and cared for. I learned much about the strength of women from her.