You are here: Home / breast cancer / What To Expect During A Core Needle Biopsy

This is a throwback post from my caringbridge.org site posting of Wednesday, March 24, 2010, posted about a month after my lumpectomy. After the lumpectomy, my breast surgeon had an MRI done, and a 2nd very small lump in a hard to reach spot in my lower left breast was found. Because of the unusual placement of the 2nd lump, I needed to have a procedure called a core needle biopsy.

I’ve never shared my experience about my core needle biopsy procedure in my blog, before this. I didn’t want to scare anyone else off who might have to have one done, but I know that there will be others who will have to have this procedure so I think it’s worth posting about my experience in the hopes that this could help prepare them. I like to know what I’m facing so that I can prepare myself both mentally and physically; if you do too, then read this post. If your coping mechanism is that you’d rather not know what’s in front of you, then don’t! Everyone has their own way of getting through a crisis, you do what works for you!

Wow. What a crazy experience the core needle biopsy was. It was worse for me than the lumpectomy surgery. I think it was even scarier for me because I was wide awake and so completely aware of what they were doing the whole time. I don’t want to scare anyone who may someday have to have this procedure, but this was one crazy, horrible, barbaric procedure! And that’s being kind.

I went into this procedure rather unaware. I had no idea it would be painful or how frightening it would be, so if you know how to prepare going in, perhaps it would be easier for you. Or maybe you could take a xanax or something to calm you down. I know I wish I had. I also wish I had known that I should have had someone go with me. I originally thought I could do all this on my own and at this point, I still wasn’t bringing someone with me to every procedure. I wish I had for this one.

The procedure was done in the hospital by a specialist. After spending some time in the waiting room (it seems that there’s always a wait for these procedures), I went into a room and was told to remove my top and bra, and then sit facing forward in a reclining chair. Directly next to me on my right was a radiologist operating an ultrasound machine so that she could help locate exactly where the very tiny lump was, to help guide the doctor during the procedure.

Once the spot was found on the ultrasound, the doctor came over to my left side side and inserted the hollow core needle into my breast so that he could remove several thin, cylindrical shaped pieces of tissue from the very tiny tumor. The needle is hollow and as the picture shows, looks a lot like a gun – kind of scary. Well that should have warned me, because it’s way thicker than a normal needle and of course, that much harder to insert, but I just wasn’t thinking straight during all these early procedures and didn’t realize how tough this was going to be.  I was often so focused on getting the procedure scheduled, that I would often forget about what they were actually going to do, during it. 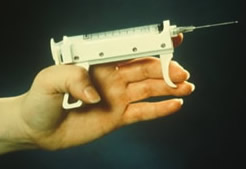 The doctor did about 6 passes with the needle. In between he would go to a table and remove the tissue specimens from the needle, and then come back to my side to remove more. I had to sit perfectly still throughout, in an awkward position, to ensure that the ultrasound would show where the hard to find lump was.

Truth: It was painful. My breast was already quite sore from the recent lumpectomy and the lump was in a very difficult to reach spot, and I was really nervous. At first, when he left my side after the first pass, I thought he was done and asked the radiologist if the procedure was done but she said, no, that the doctor would need to remove several more specimens in order to have enough to do a biopsy. That’s when I started to slowly but surely panic.

If you’ve ever had a tooth pulled, I would compare it to that; it’s similar to the pressure when the dentist is pulling a tooth out, but imagine having a tooth pulled out of your breast. The doctor had to push very hard to insert the hollow needle, and then a gun sound went off as the needle went into the small lump in my breast to remove the tissue. And because the doctor’s hand is being guided by the ultrasound, it was important for me not to move at all, and to stay completely stationary so that I wouldn’t interfere with his ability to find the exact spot.

It was honestly more terrifying than the surgery, more painful than any other procedure I’d had done to date. I think it was about 20-30 minutes from beginning to end but it was so frightening that it seemed longer. I was scared and frozen in place throughout the entire process.

One of the nurses in the room could see how scared I was and came over to hold my hand every time the doctor would begin the insertion process. I didn’t even ask her, she just came over on her own and gently took my hand during each subsequent tissue removal.

After they finally removed all of the specimens they put a little tiny titanium “seed” into the spot where the tumor was and then the doctor told me they had to do a mammography to see if it was in the right spot so that in the event that the lump is benign, they’ll be able to identify it in the future on mammograms or MRI’s or ultrasounds.

When the titanium seed was in place and they told me that the procedure was finally done, I just broke down and cried more than I’ve cried since this whole process began. I was really sobbing, with tears pouring down my face, snorg pouring out of my nose, shoulders shaking, my hands over my face as I wailed out loud. I couldn’t stop for about 10 minutes, it was very unlike me, as I’d never let it all out like that during a procedure before.

Throughout all my crying, the nurse and radiologist kept patting my knees and feet and holding my hand and saying, “You’ve been through a lot, it’s a lot to deal with,” and being so sweet and kind and compassionate while I just kept sobbing.

Then they even held my arm as they walked me to the mammography room and then whispered to the mammography radiologist to be careful with me, because clearly I was a wreck. She was also really nice, and actually didn’t squeeze as hard as they usually do, and let me tell her when she needed to stop squeezing the paddles, which is not what they do during a regular mammogram from my experience.

Once the mammogram ensured that the seed was in the right spot and visible, they gave me little, tiny ice packs to put inside my bra, to help reduce the pain and swelling on my breast. The cool mini ice packs felt good and helped numb the area, which was so tender. By this time, I was starting to feel a lot better as I knew the worst was behind me, but the staff had apparently decided they needed to keep an eye on me, and stuck by my side until I got dressed and left the hospital.

And then, when I got into my car in the hospital parking lot, I realized that the procedure had taken so long that I had to go straight to a 3 hour client meeting a full hours ride away!

What was I thinking?! About halfway there, I realized I was just about ready to fall asleep I was so exhausted, but in some ways I think it was helpful for me to just go back to work so I couldn’t spend too much time dwelling on the crazy procedure or the test results which won’t be ready for at least another 3-5 days.

I am so damn glad that this procedure is over. If I ever have to do that again, I swear, I will make them put me out before I’ll stay awake through that again. And I had 2 children through natural childbirth with no epidural and no drugs and my son was 9 lbs. 4 oz.! So, it’s not that I’m a wimp about pain.

Here’s what I would recommend anyone going through this procedure keep in mind to help get through a core needle biopsy:

I hope that you don’t ever need to go through this procedure but if you do, please consider the tips above to help you through.

Previous Post: « Time To Throw Away the College Guides
Next Post: Beyond the Pink Moon Support Group »