You are here: Home / memoir / A White Horse In Ireland 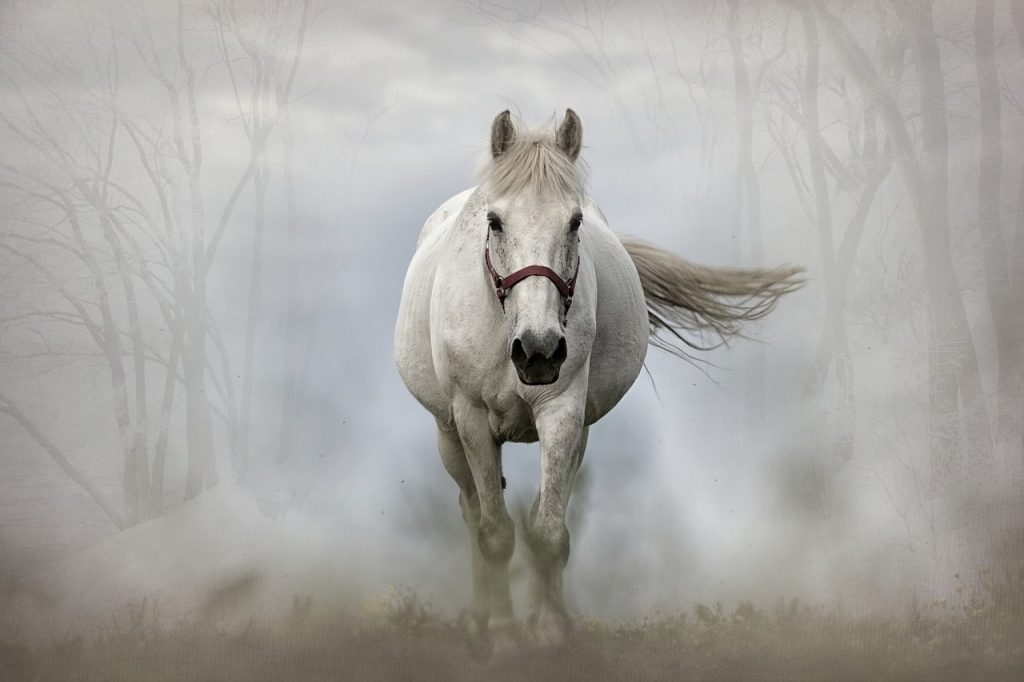 Swirls of mist surrounded Fran and I as we walked through the gates of the abandoned castle ruins. We had barely begun to explore, when we suddenly heard the sound of thunderous, galloping hooves bearing down directly at us with such force that we could feel the ground shaking under our feet. We looked at each other in alarm and quickly decided we’d better get out of the way and scrambled up a grassy bern to the next level of the decrepit fortress.

We started to panic, looking around for a quick route out, but before we had a chance to bolt, a wild, white, spectral horse came galloping up about 50 feet in front of us and came to an abrupt halt, wildly snorting white, breathy steam out of his nose while glaring at us eye to eye.

This trip was a romantic endeavor. I was visiting my Irish boyfriend who’d worked in the United States for a few years to make his fortune before returning home to start a contracting business in Dublin.  He was what you’d call Black Irish, with dark black hair, black eyes and a 5:00 shadow so intense that he would shave twice a day if we were going out in the evening.

Fran and I got on like a house on fire. He had decided I was the one for him the moment he clapped eyes on me and I soon felt the same way about him. We were well suited but he had his heart set on returning to Ireland and I’d spent the last six months mooning over him, trying to stay connected via long distance phone calls until I could scrape together the money for a trip to Ireland and now, we were looking to see if we could work things out for the longer term on his turf, in Ireland, versus mine in the US.

We were driving from Dublin to the Cliffs of Moher when we came upon this, one of the many mysterious abandoned castle ruins you see randomly on the roads throughout Ireland.  When we approached the entrance, there was no one in sight to take our money or show us around the castle ruins.  This wasn’t the first time we’d experienced the rather lax Irish system of tourism, so we decided to open the gate and go inside anyway, only to be greeted by this huge and fierce horse living alone in the  ruined castle, apparently keeping watch to make sure no one desecrated his ancestral home.

Once the horse recognized that we meant no harm he turned and galloped back off, just as loudly and furiously as he came, and once we caught our breath, we quickly decided that this was a sign that we should end our tour and get out of there.

We tripped over each other, dashing back to the car, madly panting and babbling, “Where did that horse come from? Did it live there? Was it real, or had we imagined it?”

We drove for another few miles, excitedly talking about the horse and the ruins, until we reached a small village with a local pub where we decided to stop in for a pint and some lunch.

The small, dark, smoky pub had a beautiful old wooden bar gnarled with nicks, scars and burns from years of pub-goers, and along the windows the wall was lined with low, red velvet stools, pulled up to small round tables. It smelled of the peat stoked fire place and was dark and damp but cozy; a place where you could sit for hours discussing the state of the world, like all good Irish pubs.

Our female barkeep came over to our table and asked, “What’ll you be havin’?”

We ordered our pints of Guinness and since she didn’t provide any menus, we asked if we could have smoked salmon sandwiches on that lovely Irish brown bread I’d become so crazy about during my visit.  “Of course,” she said and after bringing us our pints, went off into the back room to prepare our orders, or so we thought.

As we were talking and nursing our beers, I happened to glance out the window and caught a glimpse of our barkeep briskly walking to the nearby grocery shop.  She went in, and came out soon after with a small package and strode back to the pub.  Shortly after she came back to our table and presented us with our salmon sandwiches; it turns out she didn’t have any salmon or Irish brown bread on hand, but instead of telling us, decided to go buy the ingredients next door so as not to disappoint.

Ireland is a beautiful and mystical country with lush green everywhere you look, dramatic cliffs and contrasts and the people: the people are very special. Quirky, opinionated, funny, passionate, full of life and the gift of gab, I loved every one I met, including of course, my black Irish boyfriend. It was a magical and special place.

As we sat eating our sandwiches, Fran, looked over at me and said, in dead seriousness, “You know, many Irish still believe in the old tales of fairies and spirits.”

I nodded, as he had often talked about the superstitious legends of his childhood.  He looked at me pensively, “I think that horse was a ghost watching over the ruins and he let us be, because he knew he could trust us. I think it’s a sign.”

I paused as I thought this over. The pragmatist in me wasn’t about to argue with this man, as my time in this country had been full of many such magical signs and moments.

“Yes,” I said, “I’m sure he was a magical creature meant just for us to see.”