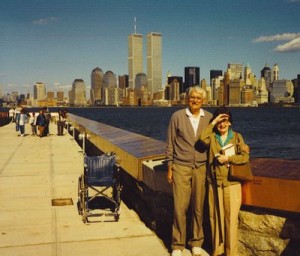 My parents at Ellis Island, with the pre-9/11 New York City skyline behind them.

The thing I most remember about life in New York City immediately after 9/11 was the immense absence of the Towers.

New York is such a crowded city, every where you look is packed with buildings, people, activity. Every space is used up, there’s never any open unused area, especially downtown.

What was so noticeable after 9/11 was this massive gaping hole where the towers used to be. It was so odd to see such a large empty space, almost un-natural, like a huge wound that hadn’t healed.

I’ve always loved New York City.  My parents took us in all the time as kids; we went to Broadway plays, museums, Central Park, Battery Park, the Cloisters, the Met.  Later when I was in college, my dorm room faced the skyline of New York and one of my favorite past-times was to sit at night and watch the twinking necklace created by the lights of the skyline. The Twin towers were the brightest of all the jewels on the skyline and were the focal point that gave me my bearings and helped me figure out where I was going.

I had a business meeting in the City, the week after 9/11, and I’ll never forget the tone and emotion that was so present that day. It was as if this vibrant, arrogant city had been struck down and toppled by the enormity of what had happened.

As I walked through Penn Station, the walls were plastered from floor to ceiling with pictures of missing people as their families desperately tried to find them.  Outside as I made my way through the city, the buildings and scaffolds were also filled with pictures of the missing and I was filled with an overwhelming sense of loss.

There was a feeling of holiness, like I was walking on hallowed ground. Everyone was gentler, people were quiet and subdued, the streets were somber and sad. 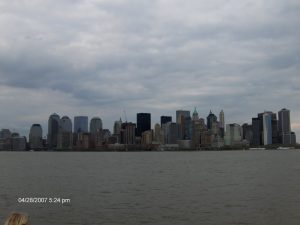 Later that fall, I went downtown to Ground Zero to visit St. Paul’s Chapel and once again I was struck by the stark and visceral outpouring of grief and emotion. Every single spec of space on the iron fence surrounding the chapel was filled with images, cards, posters, banners from people all over the world who wanted to share their grief and respect for the victims and, it seemed to me, for the City.  It was both beautiful and terrible.

I watched a bit of the NYC 9/11 memorial ceremonies today, but had to turn it off after an hour or so; it was just too sad and I felt a familiar tug that was drawing me back in to the sadness and regret.

I’m glad they’ve finally filled that big gaping hole and from what I could see on TV, it seemed to satisfy all the families of those who were lost.  I’m looking forward to visiting it soon.